I’m updating you from a lovely spot in Incline Village near Tahoe. I’m on my way out of town, and I needed coffee desperately because instant can only go so far. I.V. Coffee Lab is awesome. Free Wi-Fi, with dog friendly tables outside & a little hallway with couches that dogs can join you in as well. Tako gave it four paws up.

Sunday night (the night before launch) I was incredibly nervous. I’m not sure why. I don’t know what I thought I could possibly do wrong, per se, but I have a tendency to doubt myself.

But my usual response to self-doubt is to throw myself headlong into whatever it is anyway. So I had one last slice of birthday cheesecake (thanks again, Sonya!!) and a cup of coffee, gave Tako his last hard-boiled egg* for breakfast, threw him in the car, and off we went.

We had to stop in Concord for last-minute car maintenance (routine stuff, but getting an appointment was nigh-on impossible!!) so we explored their downtown a little. How cute is Concord? How have I lived 40 minutes away from Concord for over a decade and never really been to that downtown?

After the car was done, we were actually, really, truly on our way. As I was driving up to Tahoe, I had multiple concerned calls and texts from people in regards to the Klamathon fire, which was somewhat close to where I was supposed to spend the next night.

Lessons learned: If you’re planning on driving through Northern California, keep an eye on the Cal Fire warnings. More on that later.

Our first stop was a campground near South Lake Tahoe called Fallen Leaf that will forever hold a special place in my heart now as the first place Tako and I went camping.

Tahoe is so close to San Francisco that I don’t know anyone who doesn’t spend at least a couple weekends a year there. I always love it, and Tako has only been twice, but he seems to be a fan.

I tried to start easy for the pug’s sake. Tahoe was at least twenty degrees hotter than SF has been, and I was worried about overheating him when he’s a bit out of practice. But we hike in South and East Bay pretty often, where temperatures are a bit closer to Tahoe levels, so I guess he was more acclimated than I thought. Or maybe Tako is just a really hearty little pug. Either way, he was raring to go, so we had some adventures around Fallen Leaf Lake.

#1: Tako jumped into the lake. He loves the ocean but has always been scared of lakes and rivers — he’s a mystery wrapped in an enigma — so I didn’t even bother getting him a new floaty vest. I’m reevaluating that decision.

#2: Sunset on the lake was spectacular. 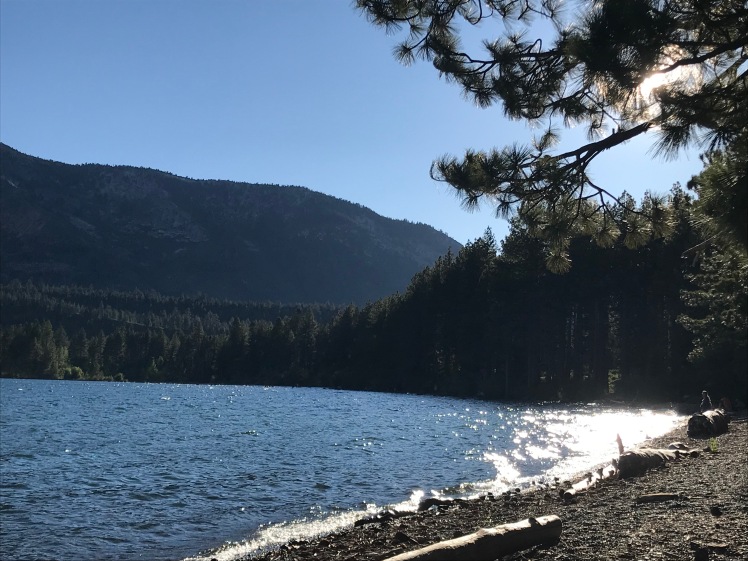 When we checked in, the ranger asked “Are you alone?” and I said yes, but her face said, “Oh dear.” She explained that bears have been highly active (during daylight as well as night), and coyotes would probably try to eat my tiny dog.

I’m pretty sure she meant well, warning me about possible danger, but it felt like she was discouraging me.

Spoiler alert: Neither Tako nor I was eaten by bears.

*I’m sure this isn’t 100% true. I think if I give it my all, I can figure out hard-boiling eggs over a camp fire (or at least find pre-boiled eggs in a cafe somewhere). But I told him I make no promises. He was not pleased with the conversation.