I’m separating Day 16 into two posts because Idaho should have its own showcase. I booked a hotel in Coeur d’Alene solely to break up the drive from Seattle to Missoula (CDA was cheaper than Spokane), and I got so much more out of today than that. I feel so lucky to have stumbled upon how amazing Idaho is on this journey.

I had planned to go out last night and explore downtown Coeur d’Alene, but if you read Day 15, you know Tako and I didn’t leave the hotel once we arrived. I didn’t even go out for dinner. I just decided to spend an hour or two downtown before I headed east and went to bed.

I wish I’d had the energy to explore last night, or that I had planned to stay a second night. I feel like I really missed something by not spending an evening in Coeur d’Alene.

Small note: I only spent three hours in Coeur d’Alene. Keep that in mind while you read this.

I’m sure you already know this about me from previous posts, but I am a sucker for towns rife with murals and public art on display. My first clue that Coeur d’Alene was made for (art)lovers was in my hotel. The hall I was on was lined with vintage Coeur d’Alene posters. 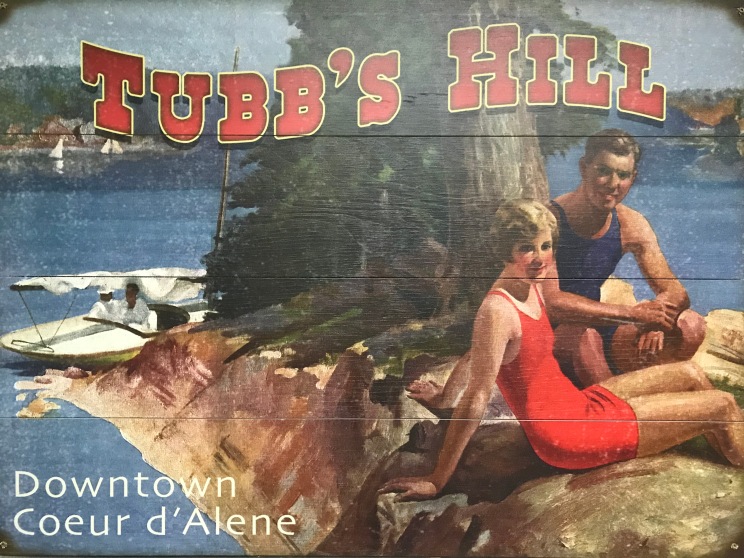 While I was taking these photos, Tako managed to open the clip on his leash and took off running down the hall and good grief is my pug fast. I gave chase, but I was hindered by flip-flops, and I’ve personally witnessed Tako out-run a collie before. I had no chance. By the time I caught up, he had found the dining room where they serve the continental breakfast (because of course he found the food) and introduced himself to the woman attempting to make herself a waffle. She was nice about it, but really Tako?

Not to knock the FairBridge Inn but was not shall-we-say an upscale place. To be honest, I found the cheapest dog-friendly hotel I could in the area. It was just off I-90, so you can imagine I planned to skeedaddle bright and early. The room was…fine? (Let me put it this way: I requested non-smoking but that apparently wasn’t an option.) But the art was so cool!

Then I got downtown and discovered art is literally every few feet. Here are just a handful of the murals, mosaics, and sculptures I found on the downtown streets. They even designed a custom heart logo for the CrossFit gym.

Downtown Coeur d’Alene is about as picturesque as you can get. 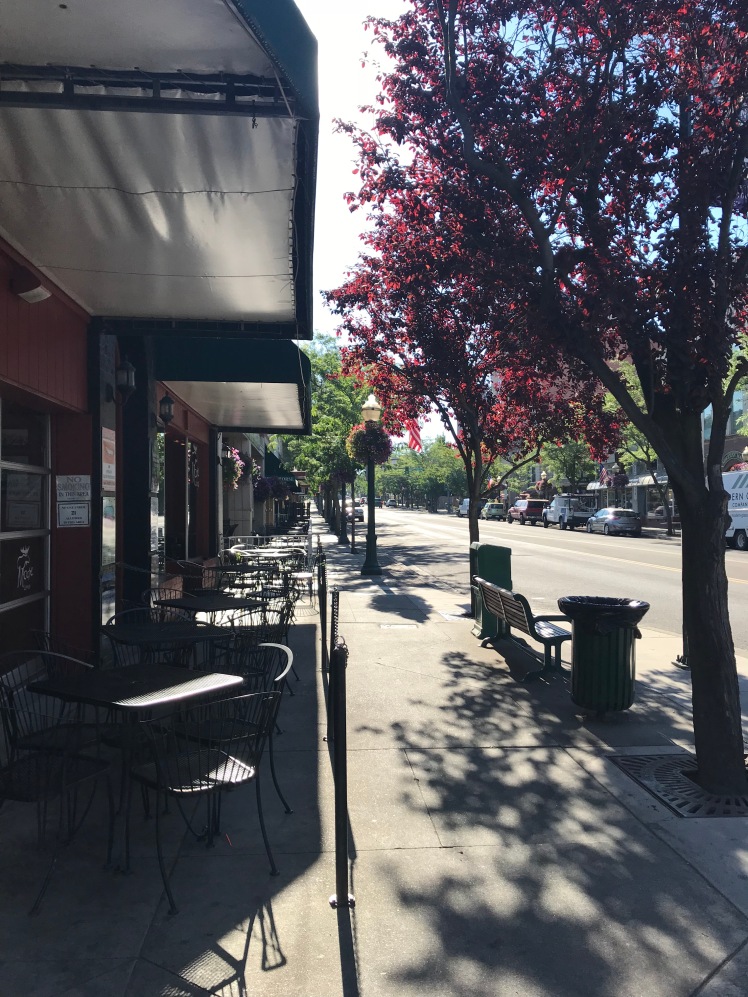 Doesn’t that remind you of the old Americana / Small Town, USA main streets we see in films set in the mid-20th century?

And I found my new favorite coffee shop, Vault. 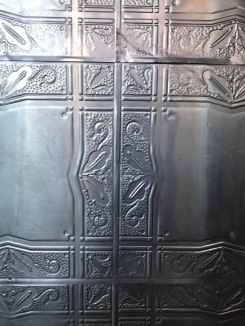 That etched tin tiling is their front counter’s facade, and it’s topped with marble. The bathroom had a tufted bench in it, guys. A tufted bench. I recommend the Mexican Mocha*. It was the perfect level of spicy.

Tako and I sat outside while I drank my mocha and downtown started to fill up. We’d gotten there so early we mostly had the place to ourselves for half an hour. Seated at that table was the first time I realized how friendly people in Idaho are.

No matter where we went in Coeur d’Alene, people would nod or say hello when they passed us. Strangers would walk up with a wide smile and no reservations and make light conversation about my dog/coffee/backpack. I’ve never felt more welcome, and most of them seemed surprised to find I was a tourist, let alone from San Francisco. (I’m not sure what to make of that last bit.)

In short: the people of Idaho are fantastic. I’m a big fan.

Remember how I was saying Tako is afraid of wooden bridges? Apparently, that extends to docks and boardwalks. Anything wood it seems. So Tako was scared of the resort’s floating boardwalk (the longest floating boardwalk in the world). I put him in his pack to explore it, and he looks about as happy as he felt about it here.

The lake is gorgeous. I didn’t get to spend enough time in the area to tell you anything new about it, and the lake is surrounded with towns — Coeur d’Alene is just the biggest one — so you could easily spend a few days exploring the lake shoreline if you wanted. (There’s also a 40mi Scenic Byway around the lake that you can drive in a couple hours if you don’t have a few days.) But let’s talk about the lake for a second.

My best friend, Max, is the only person on the planet who knows this about me. So please don’t judge me. I’m being very vulnerable right now.

The truth is that I am terrified of lakes, and part of me wonders if this is to blame for why Tako is scared of lakes.

I love swimming in the ocean. I love rivers and happily paddleboard/float/swim the heck out of them. But I will not swim in a lake.

I know intellectually that lake monsters don’t exist. I get it. That’s a ridiculous idea. The Loch Ness Monster isn’t real.

But are you sure? Because, to me, it looks like anything could be living down there. And this is the shallow part of the lake.

But Lake Coeur d’Alene? I would swim in this lake. 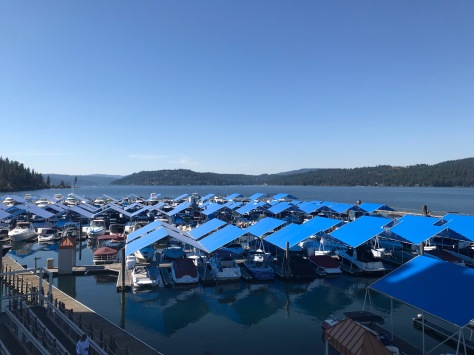 While we were wandering downtown, I came across posters for two upcoming events. If you’re in the area in August, you should definitely check them out because they look fabulous.

Ales for the Trail – benefitting the Centennial Trail project

The nickname for Coeur d’Alene is Heart City, and I think it’s perfectly suited for such an amazing place. I already miss its beautiful downtown, friendly people, and sparkling lake.

But by 11 a.m. I had to admit to myself that I needed to leave. I wanted as much time in Missoula as possible, and I didn’t even plan to stop on the road. But I ran into a couple of things that tempted me into pulling off the highway. 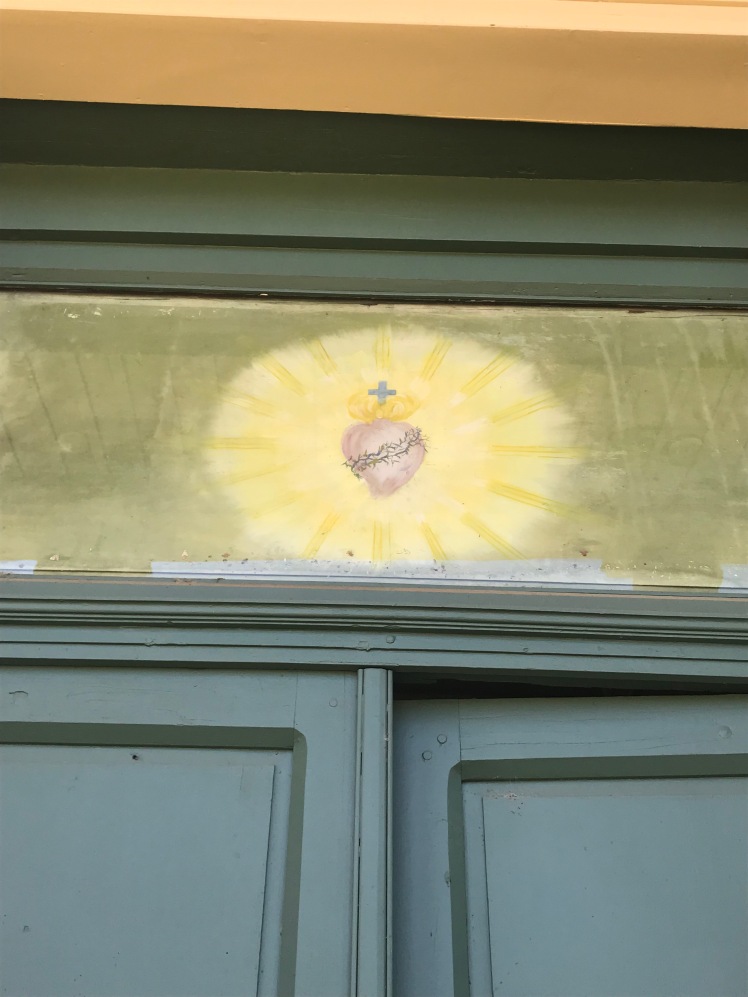 I saw a sign for the Cataldo Mission as I drove along I-90E, and then I caught a glimpse of it through the trees that line the highway. I had already missed my exit opportunity, so I had to drive to the next exit, turn around, and backtrack on the highway to reach it. Worth it.

When I drove up to the kiosk (the state park has a $5 entrance fee), the woman was so nice. (A common theme in Idaho.) I asked if dogs were allowed, and she hesitated, so I added that I could keep him in his pack, but that I understood if he couldn’t come in. She said as long as he was in a carrier, she didn’t see a problem with him going inside the mission, but that the visitors center was strictly service dogs only because of a dog fight that broke out a couple of years ago. (Yikes.)

That was way more than I expected. I thought I would have to tie him up in the shade while I ran inside the building!

Before I drove off, she added that I should be sure to park in the shade at the top of the hill because it was way too hot today. How sweet is that? 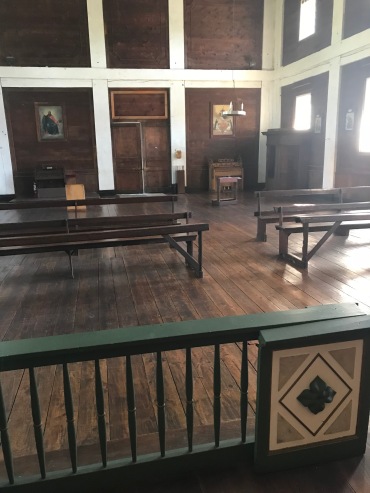 The Cataldo Mission is the oldest building in Idaho. There are other buildings & sights on the property, such as the old bell and a teepee that had no explanation. But most of the original structures (it used to be a small town square with shops and lodging) are gone.

We met a few more lovely Idahoans while we were visiting, all of whom were enamored with the pug in a pack. A group of mountain biking ladies who had stopped for lunch all wanted to pet the dog. And a family with four kids ranging from less than 6mo to almost 10y, who were considering getting a dog and had a bunch of questions about my pug pack. The youngest son was just about to turn 5, and when he found out Tako was almost 5, his eyes got really wide and he was overcome with excitement. Twinsies!

Tako basked in the attention, and I think it made him like the pack. For about a minute.

We got back on the highway but exited again when we hit Wallace because I remembered the name from somewhere and the sign said “historic downtown.” I consulted the Googs when we parked and realized it’s the other center of the universe!

When I was originally planning my trip, I found two centers of the universe on Atlas Obscura: one in Fremont, which I posted about here & one in Wallace, which was officially proclaimed by the mayor in 2004. Apparently, he answered dissenters with “can you prove it’s not?” and no one could.

So the town installed a special manhole.

The Atlas lists it as on the corner of Bank and Sixth Streets in Wallace, ID. However, it’s not. It’s right smack-dab in the middle of the intersection.

I tried to get a photo, but this was the best I could do as we drove past.

Wallace itself is so charming. You should definitely visit if you’re in Northern Idaho. Look at these streets. 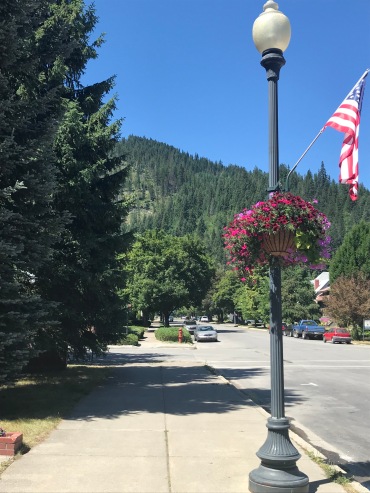 And how could you not love a town whose coffee place has this sign outside?

And I found the greatest restaurant of all time, the Red Light Garage.

Their specialty is the huckleberry shake, which I got, and it was killer. It looks like a lot of small town restaurants from the outside, but inside this is the quirkiest place I’ve ever seen, and I’m so in love.

Here are some highlights: 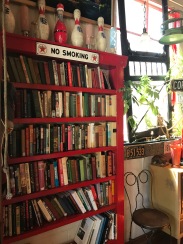 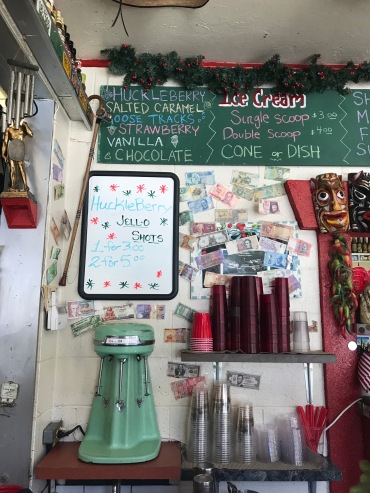 When I arrived, there was a table of four in the front window, a woman at the counter, and guy who had already finished eating and was Googling directions to his next stop. As I was waiting for my milkshake, a dad and two kids came inside, and I overheard one waitress say to the other, “Oh my goodness. Why are there so many people in town?”

Wallace is awesome, guys. Next time, I’m getting the jello-shots.

Just a few more photos of how beautiful Idaho is because I can’t even with this state.

*According to Jonathan Van Ness, whom I follow religiously on Instagram, it’s International Self Care Day. For me, self-care always includes a beach, a mocha, or both. I went with a mocha today. So much self-heart.

Discovering Idaho and its people. So amazing.

I’m really sad I didn’t leave myself a second day in Coeur d’Alene. I had so many, many things I would have done.