We got an early start in order to hike to the M on Mt. Sentinel before the heat really hit. Even that early, the trail was pretty heavily trafficked with extremely fit Missoulians. I got lapped by a man in his 70s who ran the entire trail. I can’t even imagine running this trail, but hiking it wasn’t so bad, really.

According to the AllTrails description, you gain over 600ft in a little less than a mile. That means little to me, so let me add that it’s 11-14 switchbacks* at about a 30 degree angle the entire time, as you can see from the photos.

Every single person we passed said good morning; dog owners did their due diligence and asked if Tako was friendly before they let their dogs near him. At least half of the people we passed made the joke that Tako’s legs were too short for the hike, which Tako did not appreciate. The other half admired his pineapple bandana (a gift from Max) that I had soaked to give him a little more protection from the sun.

People in Missoula really like dogs. I mean, really like dogs. They are everywhere at all times. The crackdown on dogs on bar/restaurant patios really surprises me now that I’ve spent a little more time here. I kind of wonder what the impetus was.

When we made it to the M, we got a few glorious minutes of solitude there between waves of people. 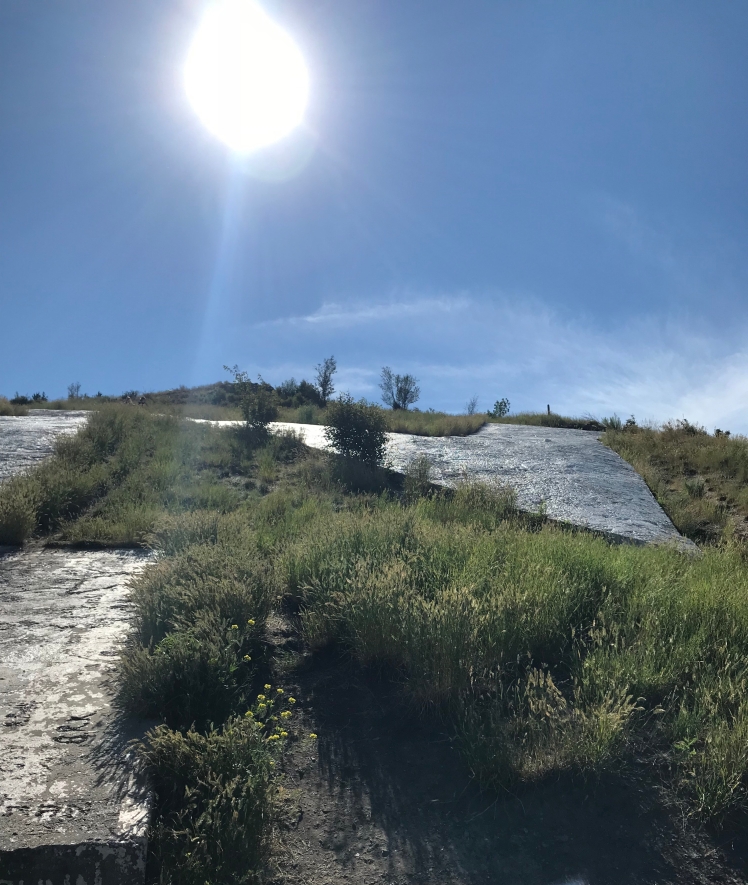 We sat for a while and looked down on the U of M campus and downtown and beyond.

Tako took a short break to bask in the shade.

And make friends with about a dozen people who passed and all wanted to pet him. Tako in his natural habitat it seems.

After we reached the M, we kept going on the Hellgate Ridgeline Trail. For anyone thinking of hiking it, it’s very steep — steeper than the M trail — and runs along the edge of the mountain; the side that faces Mt Jumbo across the river. (Mt. Jumbo is the one that has the L.)

Hellgate Ridgeline is pretty tough, mostly because the trail is even steeper and narrower and runs the ridgeline, which the name kind of implies. 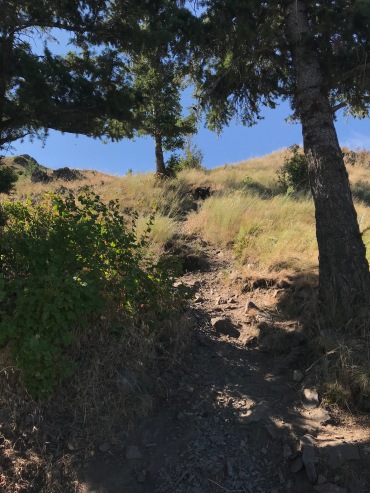 There are other paths to the peak that don’t include sheer drops along one side, but the view along the Hellgate path is spectacular.

At the 4200ft mark (about 958ft elevation from the trailhead if I did my math right), you find a High Water Mark from Glacial Lake Missoula. 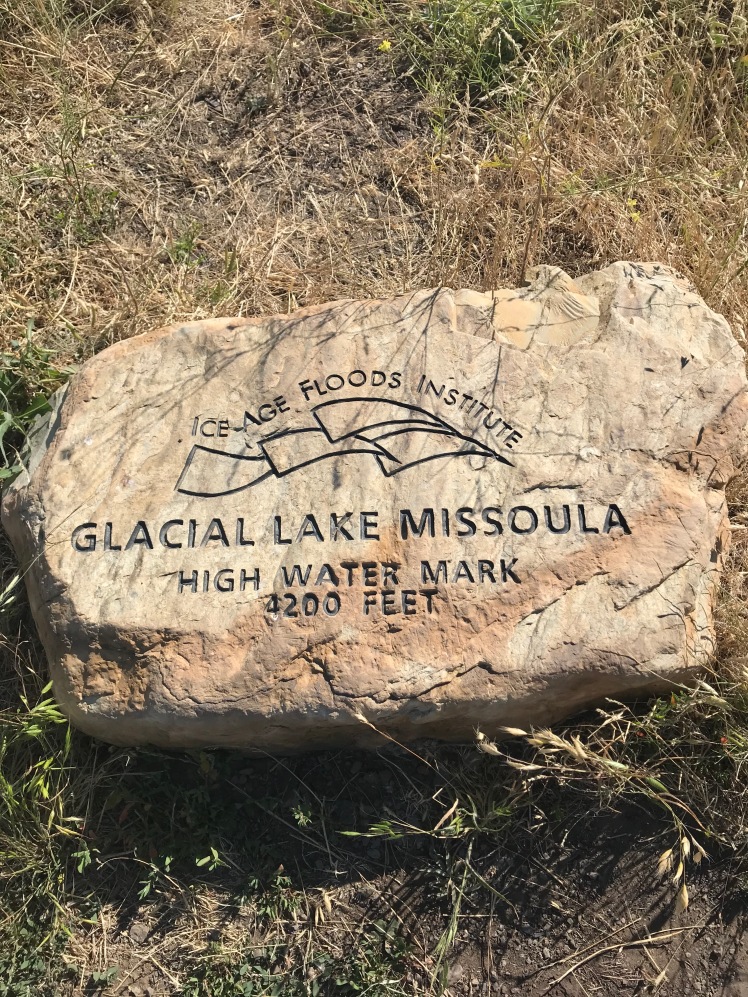 Between 15,000 and 13,000 years ago, a Pleistocene Ice Age glacier moved through the Purcell Trench in northern Idaho, damming the Clark Fork River. This glacial dam created Glacial Lake Missoula, a lake larger than Lake Erie and Lake Ontario combined. As the lake continued to grow, pressure increased on the glacial dam, ultimately causing the dam to fail. Water from the lake rushed westward at speeds between 30 and 50 miles per hour across Montana, Idaho, and Washington. The violent flow created by the draining of Glacial Lake Missoula left shoreline marks that are still visible on the face of Mount Sentinel and Mount Jumbo, a neighboring mountain to the north. 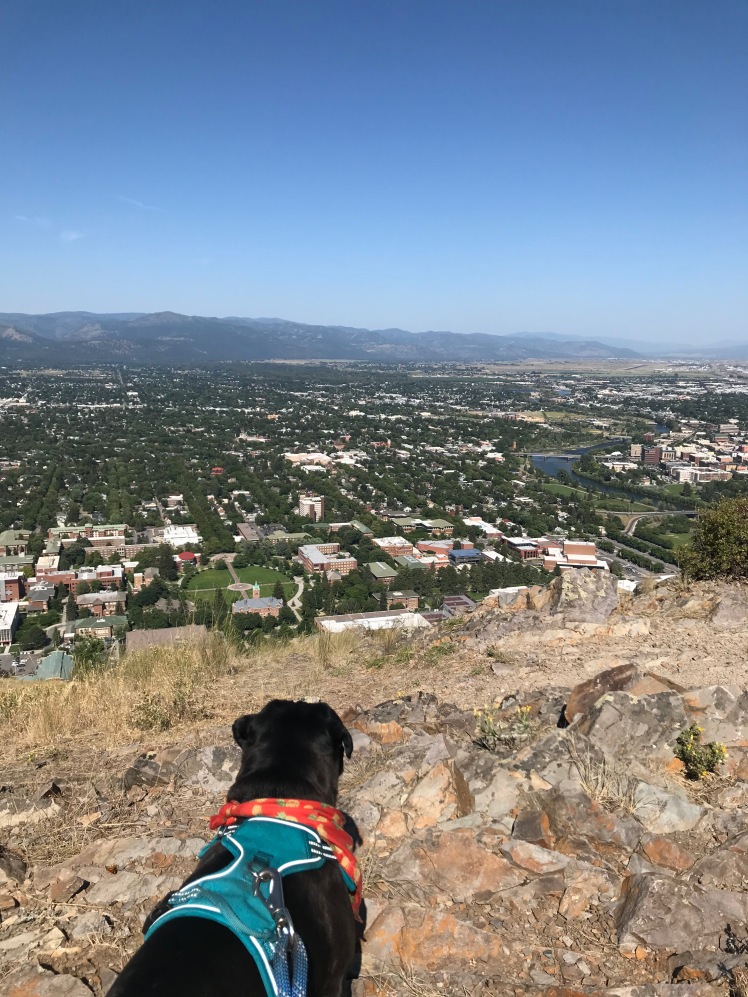 We took a post hike photo, much to Tako’s displeasure.

We spent a good chunk of the afternoon walking around the University of Missoula campus. It’s right up there with Berkeley for me with most beautiful campuses. Having grown up in California, where they’re discouraged, I’m always enamored of brick buildings. U of M definitely has some beautiful ones.

And so much art! 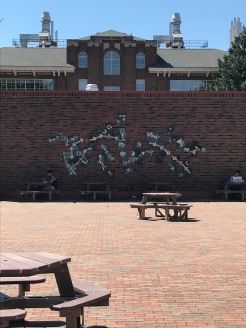 Even their bike racks are pretty (and branded!).

Before you get too excited about this college, please be aware of its systemic treatment of women.

U of M is going through a controversial period due to their handling of a history of rape and assault carried out by their football players — young men who are basically treated like gods in Montana. Some try to say it was one time and one player, who was jailed for the crime, and the coach, Bobby Hauck, who oversaw it all was fired; however, it was not only one. Please don’t listen to that garbage.

Jon Krakauer wrote a book about it, or at least the events up until 2013 or 2014, and the article in that link outlines the details of that period in the college’s life pretty well.

Here’s the part that happened after that article and book were published: The school instituted mandatory sexual harassment and assault education for all students. Then, after the probationary period required by the NCAA ended, the university went and hired back Coach Hauck.

Ladies, I fear it is not safe for you on this campus, and the school gives 0 f*cks that it isn’t safe.

Lecture over. Enjoy the pretty pictures.

We stumbled upon Big Dipper Ice Cream as we drove through town after our self-guided tour of the campus. My friend Cielle, who grew up in Missoula, said this was a must-do, so we pulled into the lot and confirmed that dogs were allowed on the patio.

I’m not a big fan of ice cream — I know, I’m demon spawn — so I skipped Salt & Straw in Portland due to the line around the block. I figured I could get it in Seattle (but I didn’t) or in LA (I probably won’t) later in my trip.

But it was so hot in Missoula that the idea of something cold was tempting. I got the salted caramel and mocha chip, not realizing that their scoops are ginormous. One would have been more than enough. Tako got a doggie cone of indeterminate flavor.

I have to admit it was the most delicious ice cream I’ve ever had. I nearly finished the whole bowl I bought, which is more ice cream than I’ve had in one sitting since I was a kid.

My friend Maggie’s bff lives in Missoula, and she put us in touch for my last night here. I met Amie at Iron Horse (repeated because we couldn’t find another place willing to take Tako), and she’s pretty amazing.

She’s a film grad student at U of M — she’s the one that tipped me off about the recent additions to the controversy I mentioned above because, you know, she’s living through them — and she’s prepping for the coolest project post-graduation. It’s called Miss Montana to Normandy, and it’s about taking a WWII-contemporary plane to the 75th anniversary of D-Day.

Miss Montana (also known as the Mann Gulch plane) has a pretty cool history. She was built to serve in WWII, but the war ended before she was finished. The state put her in service as a smokejumper plane instead, and she dropped jumpers over the Mann Gulch fire in 1949. The people behind the project see this as an opportunity to fulfill Miss Montana’s destiny to drop troops over Normandy.

The WWII anniversary events happen every year, but the 2019 anniversary is likely to be the last that veterans will be alive to attend. So the planning committee is aiming to make the 75th anniversary legendary. I honestly wish I could afford to go.

Total sidebar here: If you’re at all interested in World War II history, you absolutely have to visit the WWII Museum in New Orleans. Actually, I think everyone should visit whether they’re interested or not because I think the museum would suck you in anyway.

I went last year with my friend Alex, and it was one of the most amazing experiences I’ve ever had. When you buy your ticket, you’re given a card that’s been assigned a real person who lived and served in some way during WWII. (Alex was assigned a photo journalist, and I was assigned a paratrooper.) At each exhibit — you could spend days in this museum — you swipe the card, and the screen brings up information about the person; if they were at that battle/location; if they lived or died; what made them volunteer. (We were both assigned Americans, but I’m not sure if they only assign Americans, or if that was just happenstance.)

The museum uses all the senses to recreate (a very dampened version of) the conditions troops experienced — you walk through dark, cold rooms with fake evergreen trees and snow; in others you’re overwhelmed by the sounds of insects and gun fire; you walk through recreated homes from the time showcasing what life really looked like for Americans during the war.

The exhibit that made me sit down and cry (causing Alex to scurry on to the next room to wait for me to regain my stiff upper lip) was the exhibit on the Glidermen. I won’t get into details, but the gliders were affectionately known as flying coffins amongst some of the troops.

The exhibits give you all the backstory they can on why countries aligned the way they did, or what life was actually like for youths in Germany post-WWI. The history of Japan was a major focus for an entire exhibit because it was a shock to the world when they allied themselves with the Nazis. It made no sense on the surface. But the exhibit looks at the decades leading up to WWII, and how Japan felt they had been abandoned by the U.S. in a period of intense strife.

Desperation will make a country do some crazy things and take some crazy risks on a crazy man telling them what they want to hear. That’s all I’ll say about that.

After dinner, Amie took us on a walk through downtown. And, guys, I REMEMBERED TO TAKE A PICTURE. Not very flattering, but victory all the same.

I didn’t get to nearly as many places on my list as I wanted. I got sucked in by the U of M campus instead, dragging Tako around the entire place for picture after picture.

Written: 3k (this is just getting ridiculous)

Listening to: “The Wrote & the Writ” Johnny Flynn

*I’ve seen varying numbers, and I meant to count them but lost track around 9. Sorry!