I’m back in Missoula.

Why, yes, I did just leave. I went up to Hot Springs, MT for a night, where I stayed in a very rustic cabin. So rustic, in fact, that it had no cell service, the internet cycled off if I got too far from the kitchen door, and it ran the same water as the hot springs — very sulphury.

Once I relaxed about the fact that I couldn’t contact the outside world unless I sat on the stove, it was really peaceful up there. Nothing to do but think and write, which might have been what my brain needed to reset and get back to work on my novel.

And it probably would have done just that if I hadn’t decided that, yes, it was worth coming back to Missoula today to get up early to drive over to White Sulphur Springs for the festival tomorrow.

Amie and I will only be able to make it for Supaman’s set. We’ll get to stay about an hour. But I’ve driven farther to see only an opener’s set before, and he’s mainstage. So I’m feeling pretty good about the decision.

Yes, I’m definitely in justification mode. But I can’t help it. This artist is so awesome.

Of course, tomorrow I have to drive a total of 9h in one day. Let’s see how I feel at 10 p.m. which is about when I should be pulling into Kalispell…

This morning we woke up to a visitor.

Such a cutie. Not at all scared of people, though, so I’m wondering how many people in Hot Springs feed the deer in the area.

For the first time since we left San Francisco, I spotted what could only be rain clouds in the sky. So exciting!

We got an early start to Flathead Lake so that we could drive around the whole thing. And it was gorgeous in the morning.

Along the 93, I stumbled upon a winery! I always want to try random wineries I find along the way. Even when the wine is bad, there’s always a great story to be had at the tasting.

Mission Mountain Winery produces several wines that have won awards, though I have no idea how prestigious those awards are. I am no sommelier; I only know what I like. I did a flight of five of their whites and blushes and enjoyed all but one of them; it was a dessert wine, though, and I rarely like dessert wines.

I bought a bottle of Syrah for a birthday party I’m crashing in Alpine, Wyoming next week. So I guess the true test will be how much we like that!

The tasting room and grass patio area both look out over Flathead Lake.

And Tako was allowed to chill with me and enjoy the view.

We spent way too long at the winery, just enjoying the view and cool breeze. Flathead is the largest freshwater lake west of the Mississippi. Needless to say, driving around it takes a while, and, much like Lake Coeur d’Alene, it’s dotted with tiny towns. Every few feet there was a cherry stand, and I regret not having stopped for a batch.

Since I was heading back Missoula-way, I was going to stop at Garnet Ghost Town — a suggestion from my friend Trisha. But I heard about the Garden of 1000 Buddhas, and I had to see it.

I’m so glad we stopped here. The garden opens with this stone:

At the moment, that feels like a very apt lesson for life.

A winding path leads to the main garden, interspersed with trees, benches, icons, and stones with quotes from Buddha.

The garden is set up in a wheel shape, outlined by 1000 stupas… 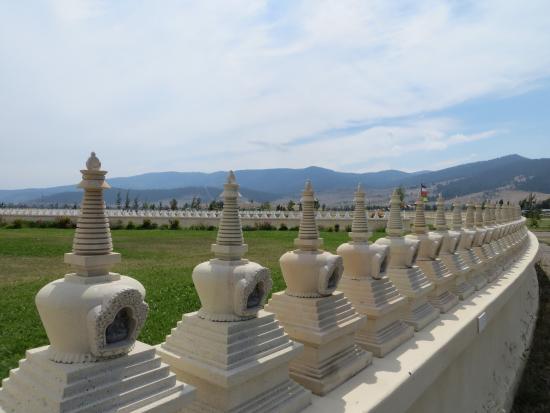 …anchored with stone Buddhas at each compass point…

…all of which lead back to the center and Prajnaparamita.

Note: A small sign at ground-level near one of the two parking areas says “No Dogs In the Garden.” I didn’t see the sign until after we left, though, so Tako went into the garden in his pack. Unfortunate, but just a mistake, as I told the woman who decided to lecture me (next to the parking area where I parked that did not have sign).

Today was cool — 78F has become chilly to us oddly enough — but humid again; sure signs of a storm. I was so excited because I’ve never experienced a Montana thunderstorm, and I could hear the thunder for an hour while we drove back into Missoula.

We only got a few minutes of rain, but it was glorious to see again after so long. I guess I’ll have to wait until my next trip for a full thunderstorm.

To bed early so we can be up by 7a.m. to get Tako to a Missoula daycare on time, and then drive all the way to White Sulphur Springs.

That cider we’re drinking is a cherry cider produced by Western Cider in Missoula. If you get to Missoula, you should definitely hit Western Cider.

*Reports vary on whether all 1000 Buddhas have been completed. Last official count I can find was 450 in 2010.

I’m exhausted. I can’t say I regret going to Hot Springs, but the next couple of days are going to be rough with all the driving to make up the time I’ve lost.