We woke up when the entire brownstone shook for a few seconds thanks to the thunder. I got up to check out my first NYC thunderstorm.

But then every phone in the apartment when off with an alert I’ve literally never heard in my life.

Sean told me that flash flood warnings go off every time it rains in New York. He said the creepiest thing he’s experienced is when it goes off in a shopping plaza, and every single phone in the area goes off simultaneously, and every person in the plaza stops talking and pulls out their phones to check. He said that, for a moment, it’s like all of New York stops moving.

Around noon, we all gave up on the idea that the rain might beg off. Shannon, Sean, Tako, and I bravely ventured into the rain for bagels and coffee, which, at Sean’s advice, we acquired from two separate places.

First we went to a place around the corner called The Bagel Factory. I got a pumpernickel with everything and jalapeño schmear that was…divine.

And the coffee was from a shop called Bread & Joe. It was the very greatest cold brew I’ve ever had in my life. So smooth and chocolatey.

Since we were stuck inside for most of the day, Tako and I got to meet the second cat roommate, Kitsune, in the afternoon. She was brave enough to come out of her room, but hid on top of the fridge so that she could watch Tako from afar.

Such a pretty cat.

Alex and I met up with my besties, Max and Gareth, in Carroll Gardens, who were in town for a long weekend trip. We met at an awesome tiki bar called Zombie Hut, where we drank Planter’s Punch and Blue Hawaiians and played Jenga with a set of blocks that have been decorated by dozens of people. 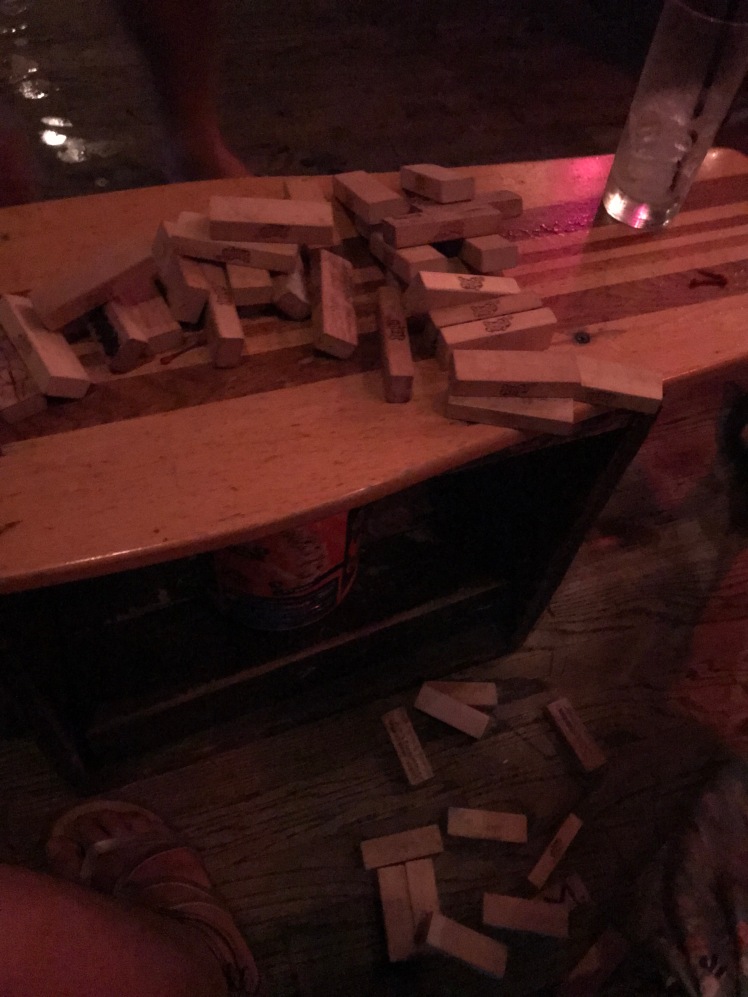 Some of the blocks are so heavily decorated, you can’t really read what’s written or make out what’s drawn on them anymore.

From there, we popped into a place down the street, Zaytoons, for Mediterranean food. Max and I, of course, ordered identical dinners; beef/lamb shwarma fries with mozzarella, goat cheese, pickled onions, cilantro, and other amazing things.

But everything our table ordered was fantastic. Alex got a classic shwarma platter, and Gareth got the Mediterranean burger. 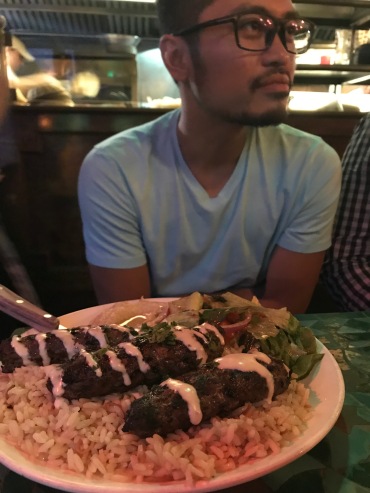 Gareth was very happy with his choice.

We took far longer at dinner than I expected, which is something that fascinates me about New York.

In San Francisco, the server would have confirmed whether or not we wanted dessert when they cleared our plates and, if we said no, our check would have been on the table seconds later.

Not one restaurant I’ve been to in New York has tried to rush us from the table. We’ve had to ask for the check 80% of the time we’ve gone out. And the couple of times we didn’t have to ask, it was because we lost track of time and spent over an hour at the table.

I don’t really have a theory about it. It’s just something I’ve noticed.

We met up with Shannon at a bar called Camp — again just down the street. I love Brooklyn. The decor in Camp is a bit…odd for Brooklyn. 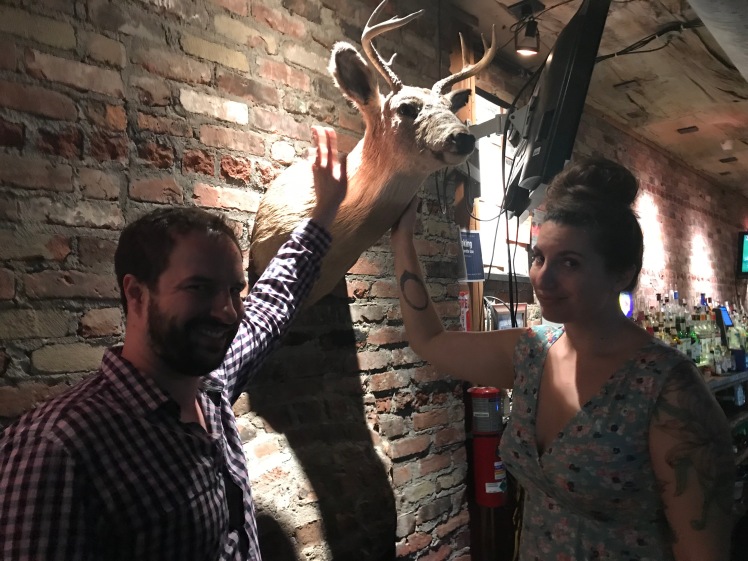 And the drinks are kinda kitsch. This is called The Dirty Girl Scout

It’s like a liquid Thin Mint with toasted marshmallows on top.

We also saw a series of s’mores platters go by, which must be awesome in the winter here.

Unfortunately, Max — who has Celiacs — couldn’t drink any of the kitsch drinks because they use flavored vodka. So we left pretty quickly and headed to Angry Wade’s, which is a no-nonsense sports bar across the way.

I managed to convince Max and Gareth to join me on a quick trip to Milk Bar.

I ordered the Crack Pie Latte, but they had already turned off the espresso machine. Cue crestfallen expression. So the ladies behind the register offered to make me a secret menu item: the Crack Pie MilkQuake. 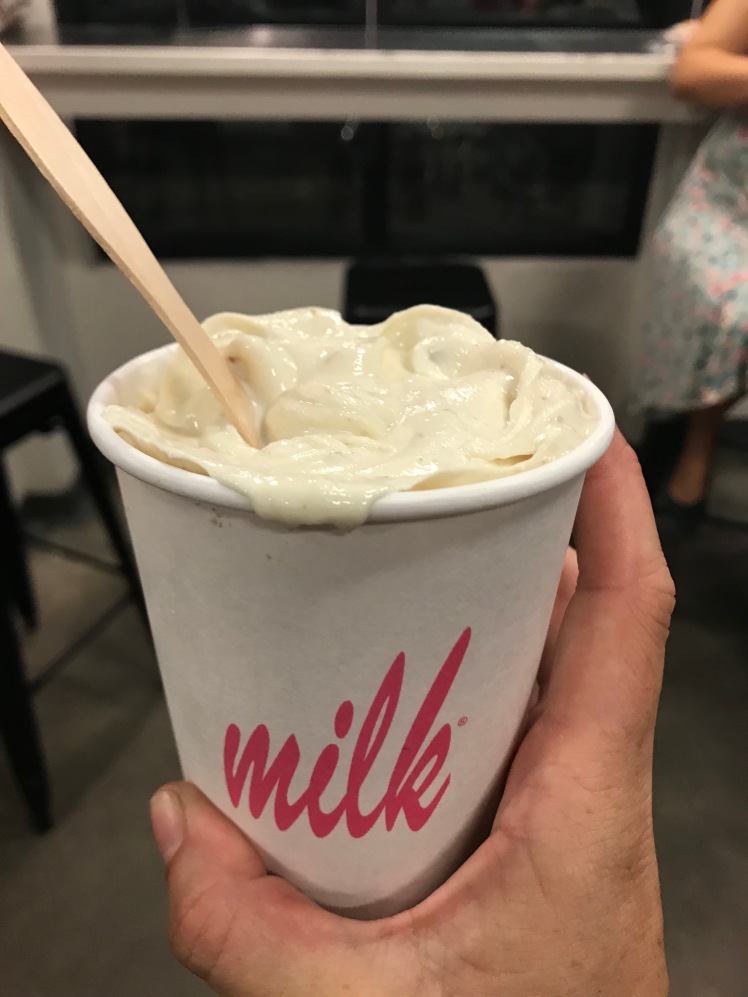 Honestly, the best part was the pieces of crack pie. So I should have just gotten a piece, in hindsight. But the milkquake was delicious, and I have no regrets.

We closed out the night in a bar called Union Grounds, very casual little spot. Max and Gareth popped over to Brooklyn Social because they wanted an egg white cocktail, but the rest of us did some of the specials at Union.

And when they came back, I decided to start with the guerilla selfies. 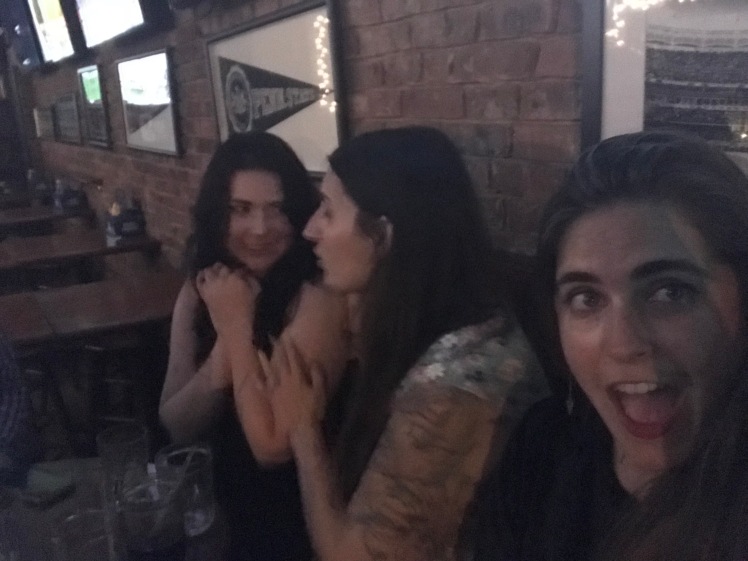 But they caught on pretty quickly. 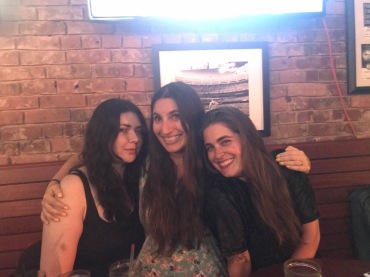 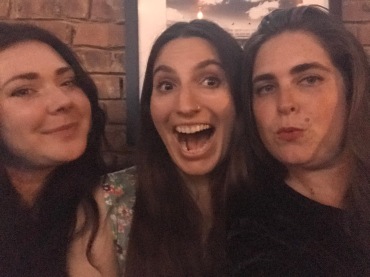 Gareth was an absolute hero. Shannon wound up seeing a cockroach crawling up the brick wall next to our booth, screamed, and Gareth didn’t even blink. He grabbed a napkin, scooped up the roach, walked it outside, and threw it in the gutter.

He was so brave that the bartender gave us a round of whiskey shots on the house. I am no longer a shots person, so I tried to resist. But peer pressure did me in, guys. (shudder)

I know it’s really lame, but I missed Tako by 1 a.m., and I insisted on calling it a night. Alex, Max, and Gareth all had flights on Sunday, so they hopped into a cab, and Shannon and I walked back.

The rain is seriously following me. Molly & Sean both commented on how weird it is to experience thunderstorms in August. I feel bad, as if they’re being punished with me somehow.