Tako is officially an international pug!

We were supposed to get up at 5 a.m. so I could get a solid five hours in Vancouver, but my alarm didn’t go off. Or, I suppose it did, but for some reason the phone only vibrated? Not sure. Either way, I didn’t wake up until 6 a.m.!!!

We got on the road by 6:30 a.m. and made it to the border by 9 a.m. It took 5 min to get through the border check, and I immediately went to Tim Hortons. Because of course I did.

We reached my uncle’s place at 9:45 a.m., giving us a trip time of about 3h15min which isn’t too bad in morning rush hour. 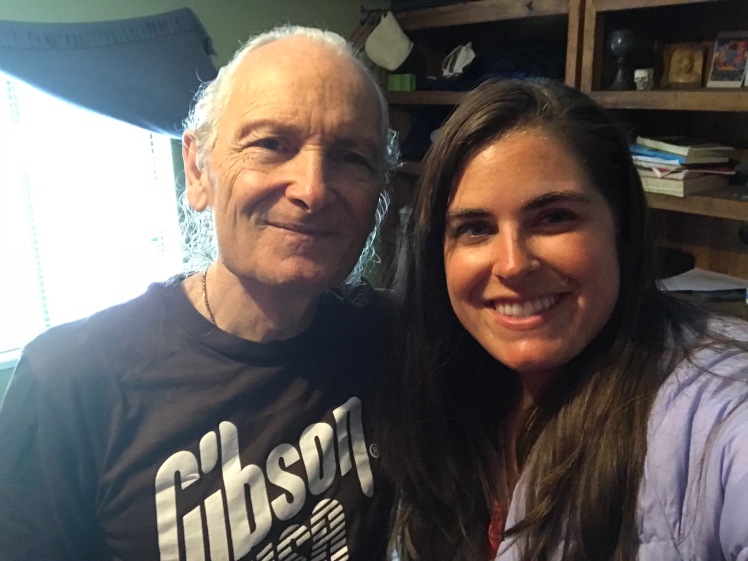 My uncle is a flamenco guitarist, which means that he spent most of my life in Spain or traveling to play in other countries. So even though his homebase was in Vancouver, I’ve never been outside of the airport.

He took me to Stanley Park, and we walked the seawall. Vancouver’s shorelines are absolutely gorgeous.

And the park is lined with benches. Some of the dedications were really creative & some were wise.

One of the coolest things is Siwash Rock, which is the embodiment of a Squamish legend, and that’s pretty astounding. 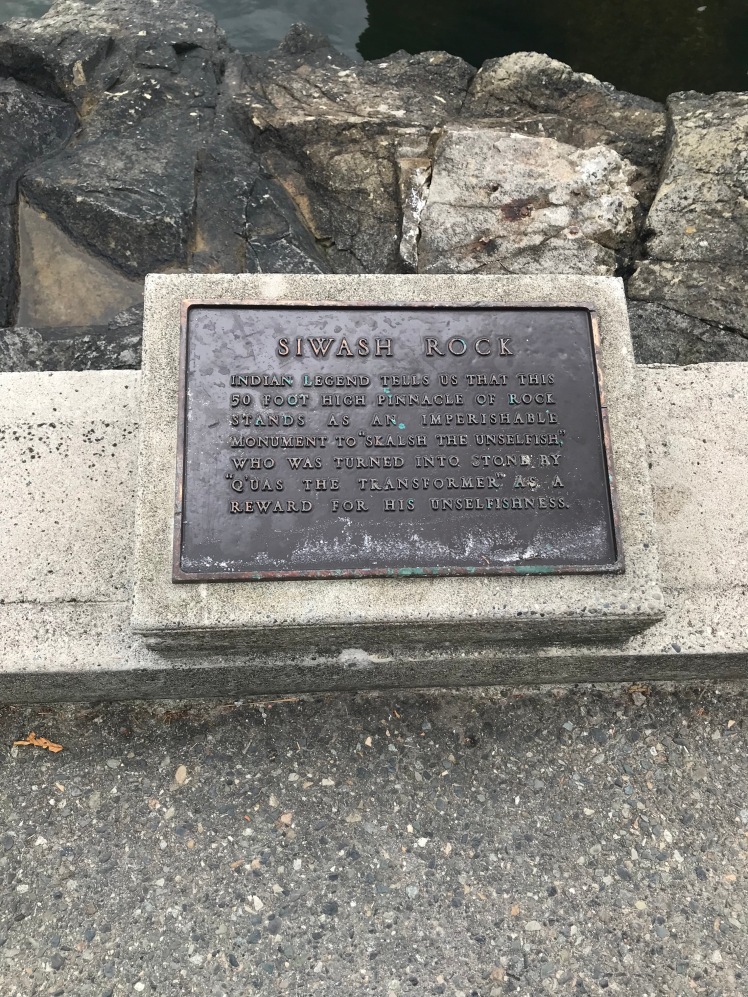 The Squamish name for the rock is Skalsh, named after the Unselfish himself.

We got lunch at a place called Stepho’s on Davie Street (delicious, delicious Greek food) and then I had to leave! I couldn’t believe I only had 4 hours there. I needed so much more time.

Thanks to rush hour traffic, it took about 5 hours for me to get back to Sumit & Ashwini’s. I had just enough time to shower, change, feed the dog, and run back out for dinner with my friend Tiffany over in Ballard. She took me to a place that I’m totally in love with now: No Bones Beach Club. We sat on their tiny patio with Tako.

I was so busy talking her ear off & stuffing my face with amazing food that I never even thought to take my phone out for pictures. Except for our drinks. Those had to be documented.

We walked around Ballard’s little downtown area for a while, and I could definitely live in Ballard. It’s just north of Fremont, so it makes sense that they have the same cool-but-chill vibe.

I got home in time to watch the end of Stargate with Sumit & Ashwini, but Tako put himself to bed as soon as we got through the door. He drunkenly stumbled up the stairs and slept straight through until 9 a.m.

Hard to choose! Seeing my uncle was so great. I haven’t seen him in person in years, and it was really nice to catch up face-to-face. Phone calls just aren’t the same.

But spending time in Ballard cleared the last of the bad taste left in my mouth from the day before.

Not enough time in Vancouver. I’m really glad I have the Toronto area coming up on my trip, but I’m seriously considering scrapping South Dakota for some time in Calgary instead…

Border Crossing With a Dog

Getting across the border was easy on the drive into Canada. But getting back into the U.S. was more complicated. That’s about what I expected, though, especially since I was coming back in the afternoon.

It wasn’t too bad, really.

Me: Good morning! (I hold out my passport.)

Canadian Agent: That a new car?

(She leaves her booth, circles the vehicle, looks in the windows, writes down the VIN from my temp registration and goes back into her booth.)

Canadian Agent: What’s the purpose for your visit today?

Canadian Agent: Are you bringing them anything?

U.S. Agent: How are you today?

Me: I’m good. (I hand him my passport and notice the he has either a gun-shaped taser or a gun on his hip. I stop staring at it. ) How are you?

U.S. Agent: Fine, thanks. What was the purpose of your visit?

U.S. Agent: How many days were you in Canada?

Me: I came in this morning.

Me: In the sticker on the window. (He stares at me.) Do you need me to pull it out?

U.S. Agent: What state is it from?

U.S. Agent: Yeah, go ahead and take it out. (I lean across the car to try and pull the stubborn sticker from the window at one of the most awkward angles ever.) Is that your home? Where you call home?

Me: (out of breath) Yes. (I hand him the registration.)

U.S. Agent: Can you roll that window down for me, please? The one right behind you. (I roll down the window.) What do you have in the car today?

Me: Nothing I didn’t come in with this morning.

I was obviously confused and really hesitant in my answer, so he got specific.

U.S. Agent: (peers through the window at Tako, who is asleep on the backseat, and hands me my passport) Welcome home.

Neither exchange was pleasant, per se, but neither was terrible either. The only thing that gave me pause was that neither agent wanted Tako’s rabies vaccination records. I was told multiple times to make sure I had it as the physical, official record, and also as a note from his vet confirming he was up-to-date. But neither did more than glance at him.

That’s not true. I was pretty taken aback by what the gear that U.S. guards wear at the border to Canada after seeing the plain blue uniform their Canadian counterparts wear. Full flak vest, combat boots, a gun (or taser maybe), and probably a few other things that I didn’t really notice. Once I saw the gun/taser, I tried not to stare directly at anything.