I think I missed something driving through Wyoming and South Dakota. I know there has to be more here than I found, and I’m sure the weather is partly to blame.

The past few days have been hard on the road. I’ve driven over 800 miles since Yellowstone, and it feels like hail storms have been hunting me wherever I go.

If it was just rain, I could sling Tako in his pack and make him deal with it. It’s not even like it feels that cold out here. It’s still in the 70s and 80s when it rains — even the hail was coming down in the mid-60s — and I can deal with rain.

But hail? No, thank you.

So we spent a lot of time in our Wyoming & South Dakota accommodations, rather than exploring. I’ve gotten a lot of writing done* but, like my dad said on the phone yesterday, I can write in San Francisco. That was never the reason for this trip.

It feels so wasteful to spend several days in a row popping out of a motel — call me prissy, but I am not camping in hail, even if I can sleep in my car — for a couple of hours and then heading back inside for the rest of the day.

I feel like we’ve been missing a lot the past few days, and that’s been hard. It’s a little like having FOMO on my own life.

But here’s the thing: I sat down tonight to make a list of the things we’d missed along the way…and there really weren’t that many of them.

I did miss a few things in Wyoming that I listed out for Day 26, and that was mostly due to exhaustion. I don’t know if I would have rallied had it not been pouring rain for part of our drive. Probably not. But maybe?

And here’s the list of spots we didn’t get to in Rapid City: Dogs aren’t allowed inside any part of Mount Rushmore, but I was under the impression we could see the lighting ceremony from the outside. That was mostly wrong. Strike this off the list.

This one chafes. I was really looking forward to walking through this, but it’s entirely outdoors, so the weather prevented it today. And it’s too far to get back to tomorrow and still make it to Minneapolis.

But I did get to see a few of the pieces from the highway through the rain! They’re that big. I saw the bull head and a vase of flowers. The flowers were especially pretty, even in the gloom.

We were supposed to head here after Braeburn, which is right when it started pouring & then hailing in Rapid City. Dogs are allowed everywhere if they’re in a carrier, so I was pretty excited about this one. But, again, almost entirely outdoors. 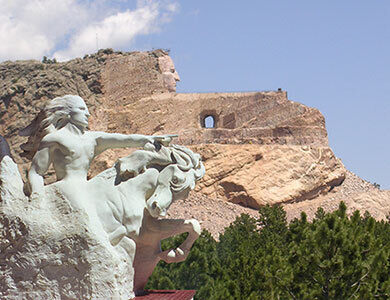 If you look at those lists, there were only three things on each of them. Three stops while driving the majority of a state? That doesn’t seem like that many, especially not compared to all the things I felt I was missing for time’s sake in Oregon, Washington, Idaho, and Montana. (Heck, in Montana I changed my entire schedule around so I could fit more in.)

I’m not knocking this area of the country; I’m really not. It’s beautiful out here, and the people are incredibly nice, and the things I’d put on my lists were things I was really looking forward to. It’s just that it feels like there should be more for the giant swaths of land I’m covering every day.

Sort of like when I realized that Montana is almost as large as California in size, but only has a tad over 1 million people living there, which is a third of the population of Los Angeles. It just doesn’t compute in my brain. I can’t make all of those facts fit together.

I think the problem I’m head-butting against is that the middle of the country is vast and flat and mostly privately owned (farmland). There isn’t a whole lot to stop and see. You’re seeing everything you have permission to from the driver’s seat.

The State/National Forests and Parks are some of the few exceptions, but, with the weather, we’ve been stuck in the car through those, too. Though they have been pretty.

I think I’m just frustrated. I hate being cooped up, and it feels like we’ve been cooped up since Yellowstone.

I’m really excited about the next few places we’re stopping, and I’m hoping my mood will turn around on the road to Minneapolis.

*Almost 8k words in 4 days!! It’s a bit early to hope, but maybe my writer’s block is finally dissipating.