I drove from one end of South Dakota to the other today.

We hit Badlands National Park today. I talked a little about the name on Day 26, but it gave me some wrong impressions about the badlands. I just kind of assumed they were going to be mostly void of life, and I’m not sure why.

Because, first of all, prairie dogs? Everywhere. I had to swerve around at least five or six just chilling out on the road, and a lot of cars were passing through that park today. They have zero fear of humans or vehicles, and it makes them oddly terrifying.

And I was trying to take some picture of these guys, who were calmly eating some grass when a van full of teenagers pulled up next to me and three girls jumped out and ran at the deer. Because they thought the deer would stand still for a picture? I have no explanation. I only know they were devastated when the deer disappeared over the ridge.

My first glimpse of Badlands should have tipped me off because there were more trees than I had ever imagined growing here.

And then I came down the ridge to the Ancient Hunting Grounds overlook.

I definitely came across the dust and bare dirt I was expecting, but even that challenged my expectations by being the most colorful dirt I’ve ever seen.

We got about halfway through the park before it started hailing again. (Grr)

I didn’t want to wait it out, so we turned towards to Sioux Falls on I-90.

Tako is scared of wind, so hail slamming against our windows is basically driving him out of his tiny puppy mind. He decided he got to ride up front today, and, looking at his face, I didn’t really have the heart to tell him no.

In the afternoon, I spotted this out of the corner of my eye, across the highway. 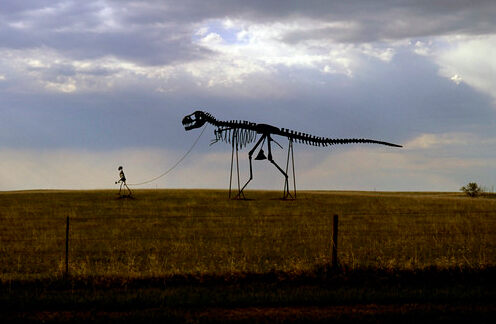 It made my day, so I had to look it up. It doesn’t seem to have a title or even an artist’s name associated with it. Atlas Obscura calls it Skeleton Man Walking Skeleton Dinosaur (but doesn’t say that’s an official title) and only notes that members of the same family who built Original 1880 Town put the metal sculpture up.

It’s on private property, near Midland and just outside of Original 1880 Town (which is exactly what it sounds like), so you can’t really go visit this. You would have to pull over on the shoulder of the freeway (or hike along the shoulder from a gas station at the exit).

The sunset in Sioux Falls washes the city a shade of pink that I’ve only ever seen in Paris. I couldn’t capture the color with my phone, sadly. I did my best, guys, sorry.

But it’s really disconcerting to be staring at a vibrant, clear sunset while rain is pouring on your head and thunder is rolling (loudly) over you.

This does not happen in California.

I’m being haunted by hail.