I was lazy today. I fully admit it.

I meant to head to the other end of Brooklyn since I haven’t explored over there much. But that didn’t happen. I didn’t leave the apartment until 10 a.m. — poor Tako — and meandered through Park Slope aimlessly because just wandering this city provides endless entertainment. 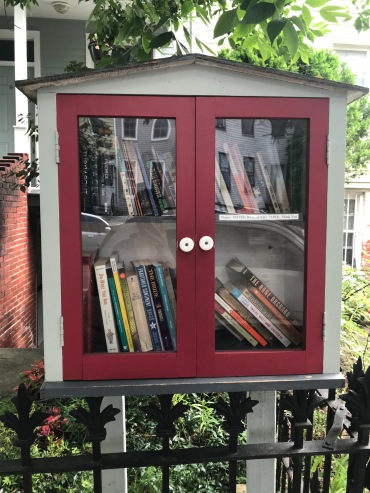 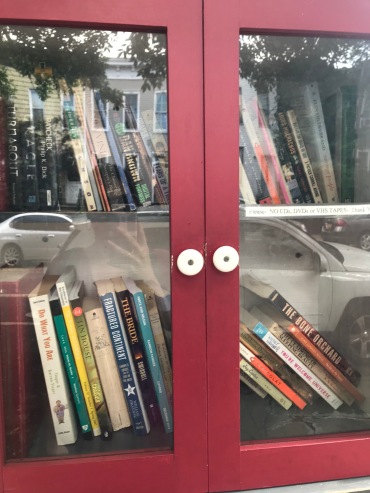 I came across a few more of those mini lending libraries. If I wasn’t leaving in a couple of days, I probably would have borrowed one this time.

Did you know that these Little Free Libraries can be registered? You can look up some near you using the map in that link. 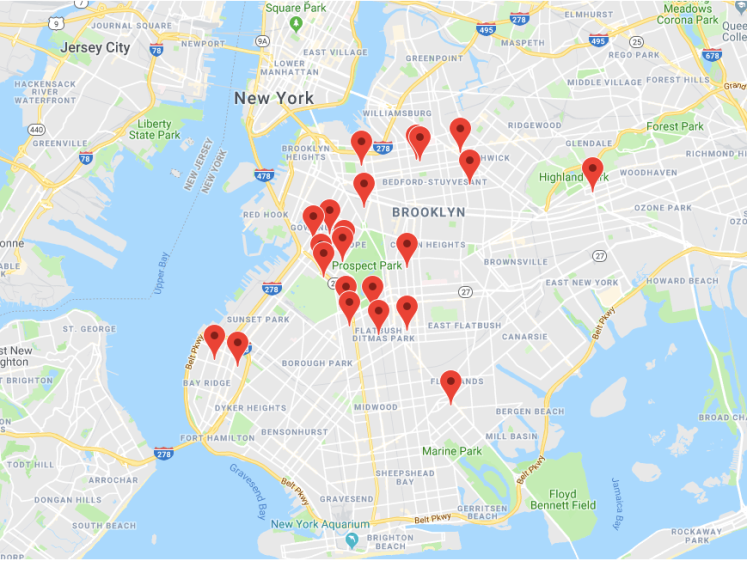 Each one has a little blurb about the books they specialize in (if they do — it seems to be fine if they’re a bit of a hodgepodge as well) and who/what business runs it. 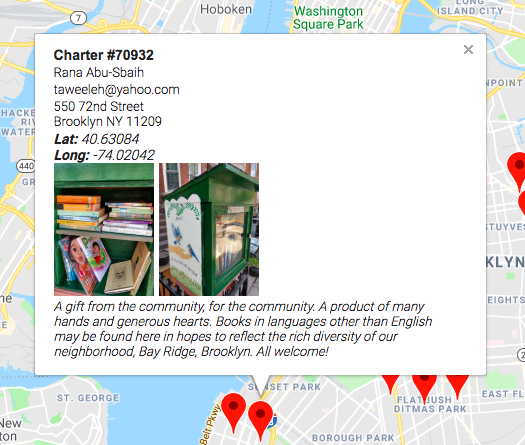 I know they’re all over Seattle since I saw them over there as well. But it seems like they’re popping up all over the world, which is really cool.

Brooklyn streets are lined with trees that are usually enclosed in a some sort of fence, which you can check out a bit below. (Left: Prospect Park / Right: random street) 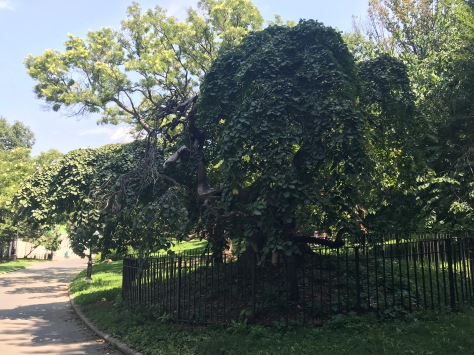 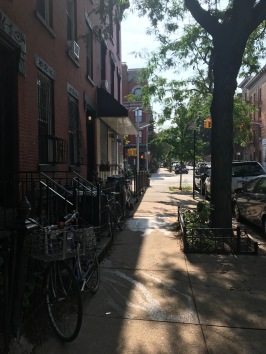 In all the time I’ve spent walking around Brooklyn, I’ve never seen anything like this. 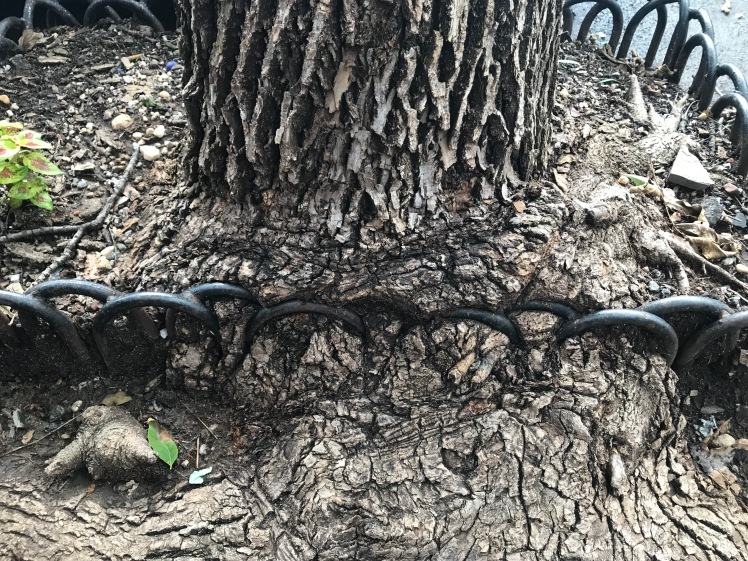 Talk about Nature vs. City. “A paltry little metal fence won’t stop me, humans.” It just absorbed the metal into itself and pushed onward. I love it.

I zig-zagged quite a bit, but I was only about seven blocks (as the bird flies) from the apartment before I saw Muse Café and thought: “Maybe I should just sit and write today.”

To be fair, they have coffee, and I spotted outdoor tables, a combo I have very rarely ever turned down. And Molly had mentioned she was free for lunch. So I couldn’t go too far. 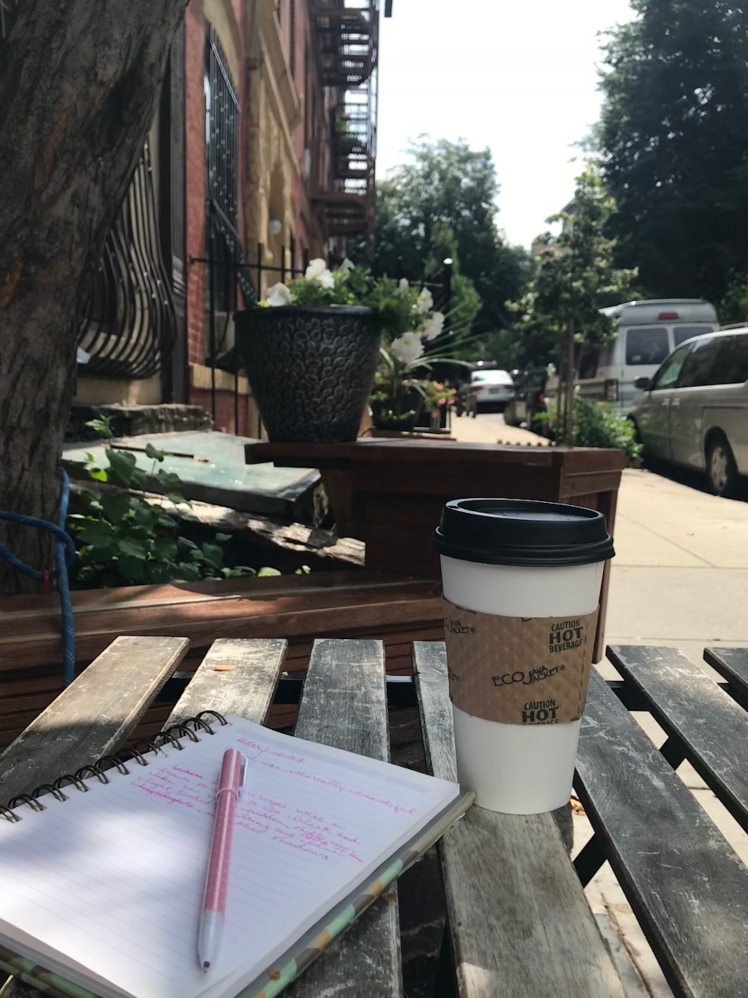 Tako hung out in the shade while I guzzled some coffee. My body is not accustomed to waiting until almost 11 a.m. for its caffeine hit.

I get a lot of surprised looks when I ask for hot beverages on hot days. I mean, New York days have been mid-90s (when it’s not raining) and drippingly humid, but I’ve had baristas confirm I actually meant hot two or three times before making my drink.

I drink hot beverages because my friend Devika’s grandmother once told me never to drink a cold drink on a hot day. She said that if you drink something hot, you’re making your inside the same temperature as your outside. (Yes, you sweat, but sweating is healthy.) But drinking something cold will only shock your overheated body and, in essence, make the air feel even hotter to your skin.

So I started drinking hot things on hot days (I can’t quite bring myself to drink cold things on cold days, though) in college. I’ve never looked back; I’ve had maybe three iced coffees in my life since then. One of which was the cold brew Sean recommended the other day from Bread & Joe, which was amazing.

A little over an hour into my writing session (which really wasn’t going well, alas), Molly was already on her way, and she recommended Burger Village for lunch. They have the Impossible Burger there, which I’ve never had, so I gave it a whirl.

I disagree you can’t tell it’s not meat. I could tell by the first bite. But I also eat way too many cheeseburgers and just had one a week or so ago. And I’m not quite convinced that the Impossible Burger is really all that good for you…see this article here.

Despite all of that, it tasted incredible. So I say go for it. 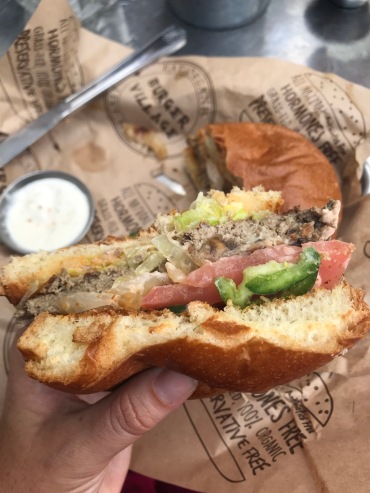 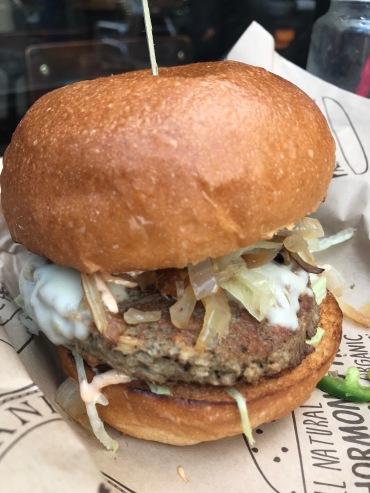 After lunch, we walked back to the apartment because I had literally sweat through my jumpsuit, and it was disgusting. Also, we were expecting some rain.

Lo and behold, we had another thunderstorm today, and yet another flash flood warning. I’ve learned to laugh about them like the locals do because, seriously, every time it starts to rain all the phones go off like clockwork. Molly and I agreed that one day the flood will actually happen, and we’ll all die because they cried wolf too many times.

Shannon told us both before she left this morning that it was supposed to rain at 2 p.m. But then two came and went with no rain, and it was sunny all day, so I thought maybe we were home free.

The storm came with no preamble — other than the phone alarms which we both checked with a “Dammit, not again” — so it was lucky we were already at the apartment. Molly and I were both in the living room working on our respective freelance projects when the sun disappeared. It didn’t slowly fade out. It just vanished.

One minute, we had beautiful blue skies with fluffy white clouds… 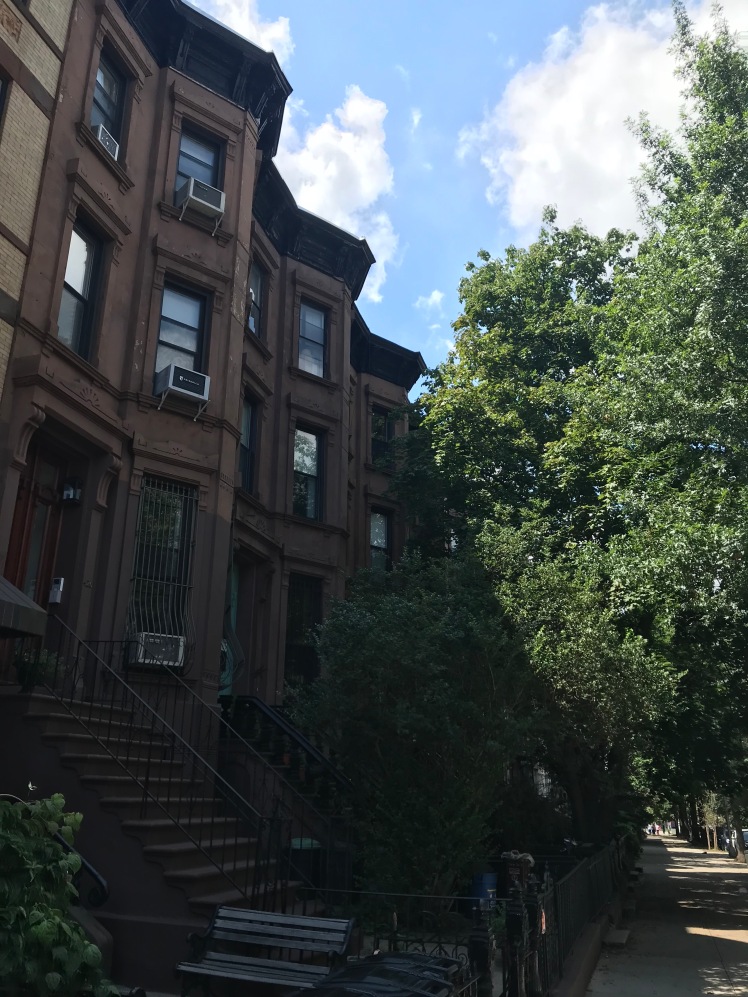 …and the next, with a crack of thunder, this. 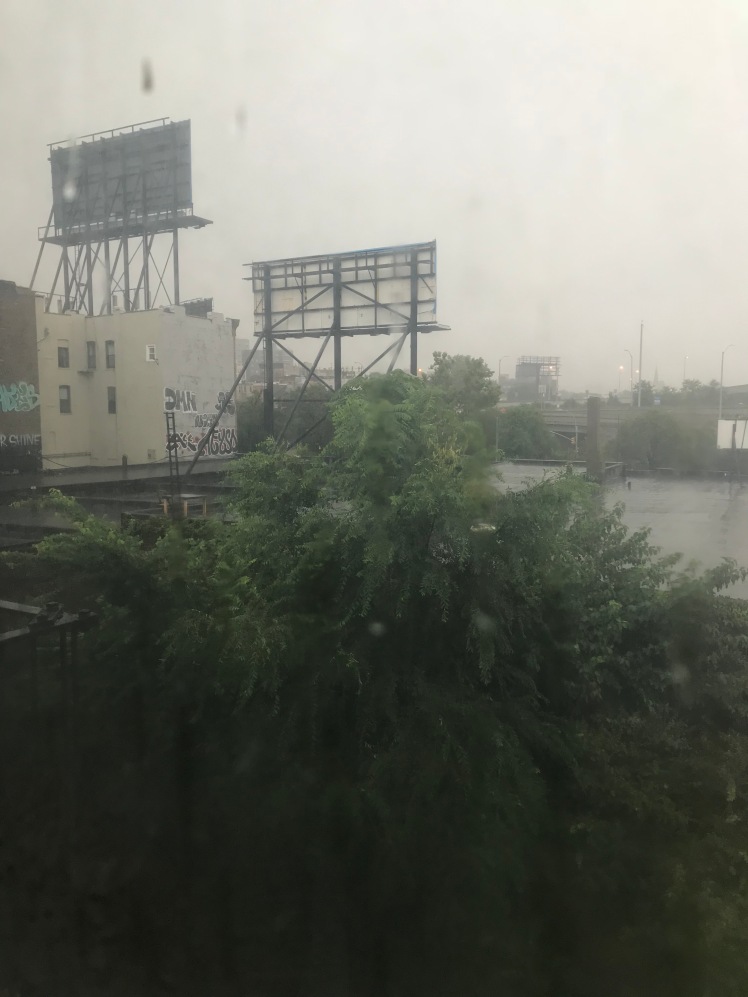 It was three in the afternoon and we had to turn on every light in the apartment just to be able to see each other. So much water was being flung at the rattling windows that, as Molly put it — and it was an apt description — it was like the apartment was going through a car wash.

By the time Sean came home, the storm was over (again). So we walked to a Mexican place Molly and I had seen earlier called Haab. 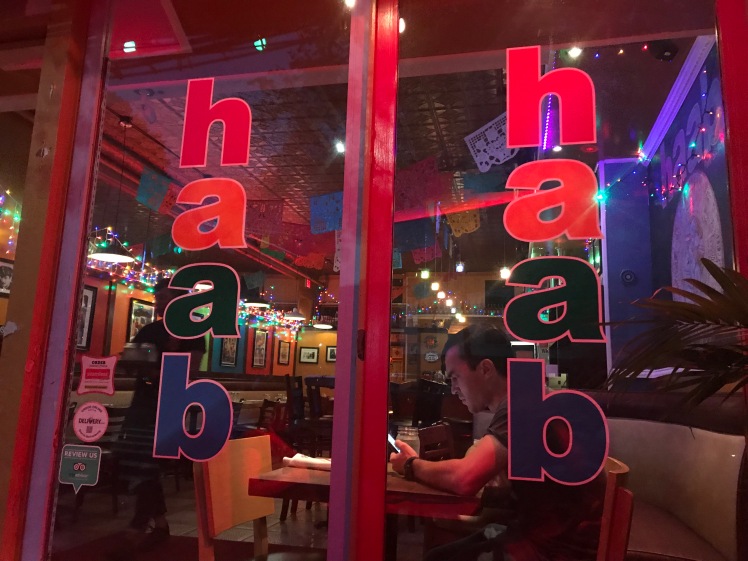 They make possibly the best mole sauce I’ve ever had. It’s chocolatey, but with a bite and very little sweetness, which is just how I like it. Good mole is hard, and this place deserves a million thumbs up for theirs. 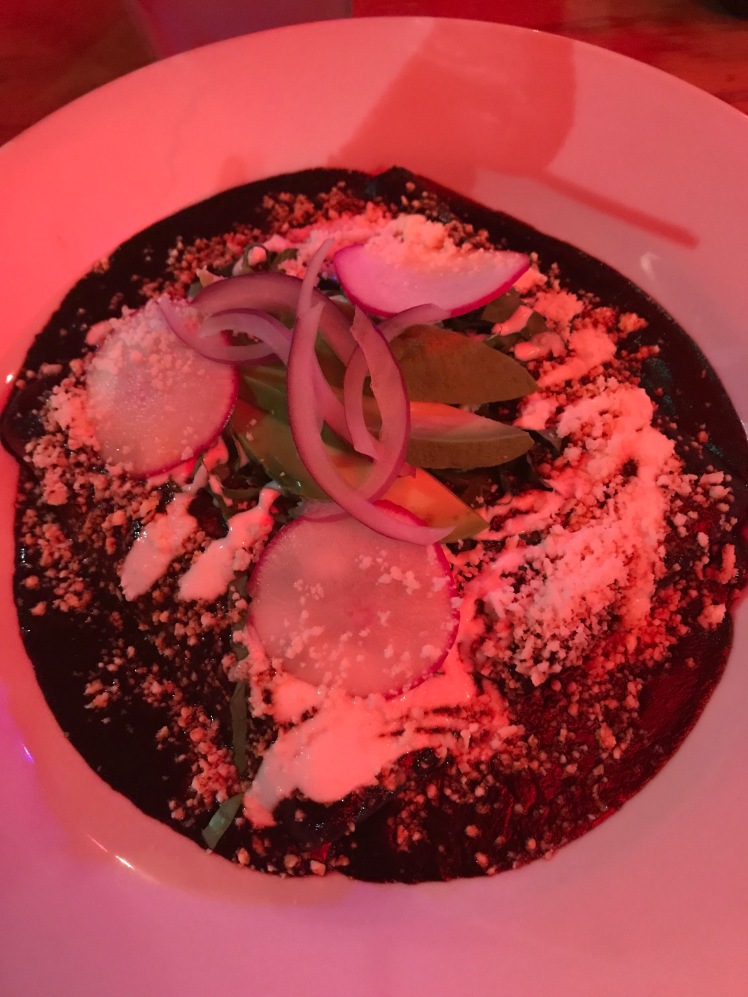 And we got margaritas because of course. 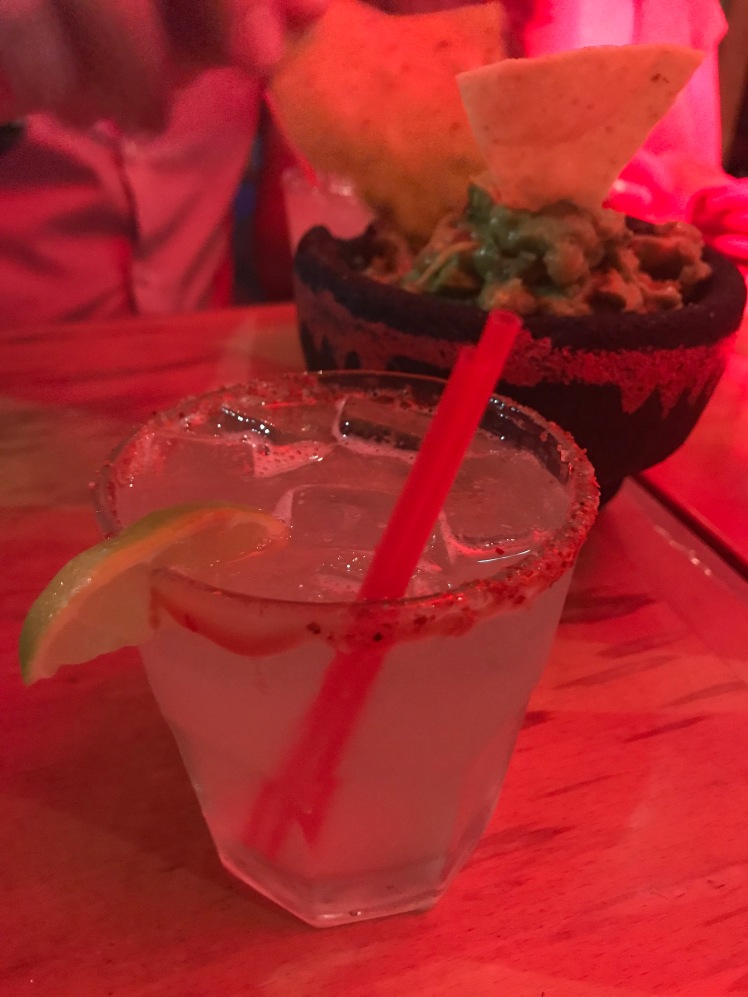 I don’t want to give Tako a bad reputation. But, guys, Tako totally humiliated me tonight.

He came to dinner with us, and I tied him up in the corner, connected to the metal fence that surrounds the patio we were eating on. We’ve done this a dozen or so times in Brooklyn, and it’s never been a problem. People are totally lax about dogs on their patios.

He was fine for the entire evening, not even flinching or making a noise when another dog on the patio lunged at him and barked right in his face. I was so proud. 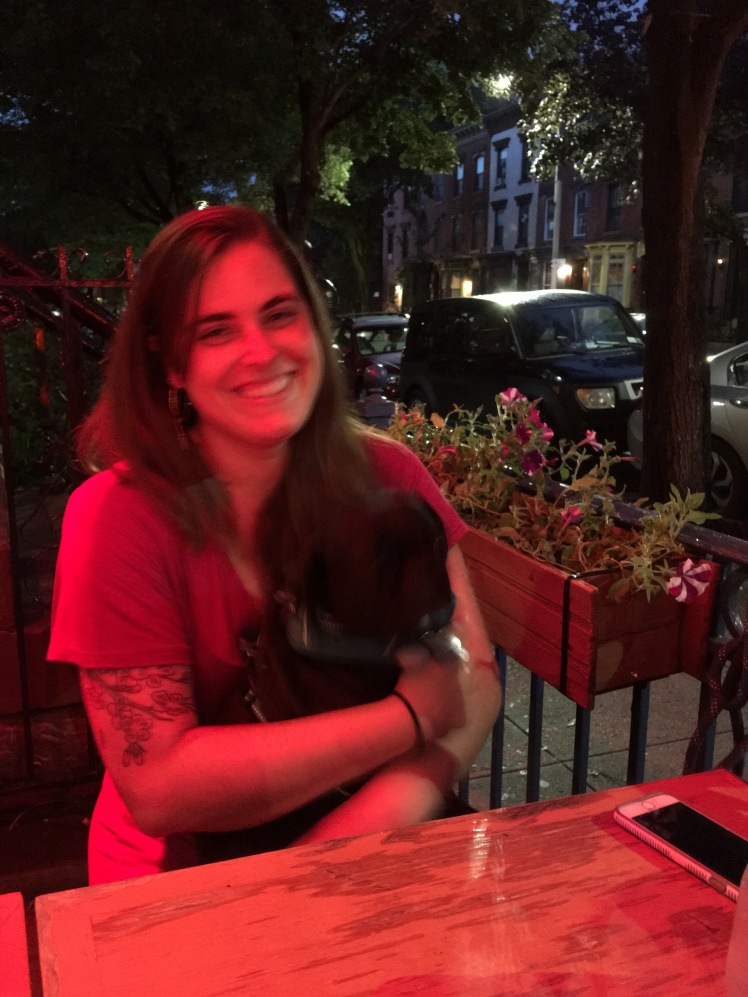 I went to the bathroom — which can sometimes set off his separation anxiety — and came back to find him curled up under the table, calm as could be. So I went back to eating, and everything was great. 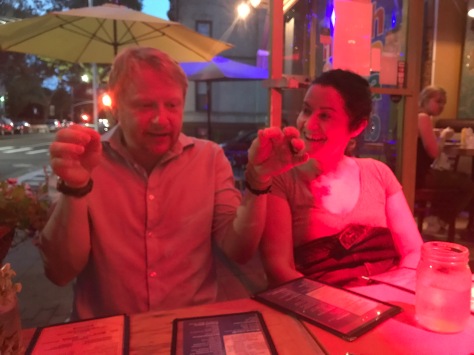 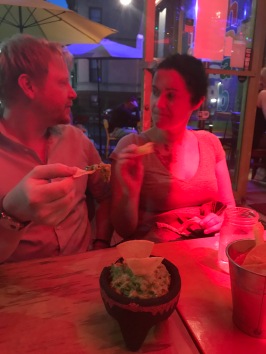 Around the time we were finishing our entrees, through the windows into the restaurant, I caught some movement out of the corner of my eye that looked kind of dog-like. I was like “Huh. That’s odd. They don’t allow dogs inside.”

And then I realized that the server was trying to lead the dog outside, and it had gotten distracted by another table and gone on a detour.

And then it registered that the flash of dog had been a black curly tail.

And then I looked under the table and found an EMPTY HARNESS.

I don’t know how Tako got loose, but he slipped his harness, ran straight into the restaurant, through the dining room, and all the way into their kitchen.

Sidebar: I am so glad he ran into the restaurant. Can you imagine if he’d run down the street? 6th Avenue is not quiet at night, and Tako is pitch black. Either I never would have gotten him back, or he would have been hit by a car.

I shot up and ran inside, exclaiming to our server how embarrassed I was, and found that Tako had invited himself right onto a cushioned bench next to a couple having dinner. The guy had a good hold of his scruff, and they laughed when I apologized.

Tako greeted me with his usual tail wag like “Oh, hey! What’s up?” as if he hadn’t just broken every single rule we have for going out. And he didn’t complain when I picked him up, brought him back outside, and held him in a death grip for the rest of the evening.

Also, I might need to start feeding him more. That harness should not have slipped off like that.

This was a really relaxing day. After everything I’ve been trying to pack in, it was nice to take a leisurely pace for a while.