I woke up at 6 a.m. with my brain in overdrive and spent 4 hours somehow managing not to call my bff, Max, who lives in San Francisco and probably wouldn’t appreciate a phone call at 3, 4, 5, or 6 a.m. her time. (Unless I was either bleeding or on fire. She would definitely answer the phone expecting me to be bleeding or on fire.)

I’m having a hard time remembering that I’m in the Eastern timezone now. Case and point, I texted my friend at 5 a.m. SF time.

Molly & Sean had a mini-break planned, so Tako and I walked them to the train to say goodbye. And also get coffee at Bread & Joe because that cold brew is so good.

Tako was horrified by the morning. First he lost Molly & Sean to the depths of Bread & Joe, then he recovered the pack only to have those two disappear into the bowels of the subway entrance. He pulled me all the way home to go see if they’d taken a magical tunnel that allowed them to beat us there.

It was kind of cute. But he pouted for hours.

Finally, around noon, I felt it was a safe time to call Max.

I need one of these. Stat.*

I spent three hours on the phone with her discussing the pros and cons of simply staying in Brooklyn and attempting to make a life for myself here. We covered a lot of ground, so I won’t get into all of it on this post.

But the gist of it was that I have committed. I live in Brooklyn now.

Technically, though, I live on Sean, Molly & Shannon’s couch, which has not really been discussed with Sean & Molly — though Shannon gave two thumbs up to the idea. So steps have to be taken to get out of their hair before Tako and I overstay our welcome. Max and I discussed those thoroughly and came up with a bit of a game plan for me.

I spent most of the day working on a few freelance projects and reaching out to contacts I have in NYC. I don’t really like the LinkedIn opportunities that I’ve been coming across in New York, so I also looked into recruitment agencies. My last position was landed through a recruiter in San Francisco, and that went very well for me for nearly three years, so why not take a chance on it here in New York?

Keep your fingers crossed for me, guys.

My freelance work has picked up again now that I’ve been stationary for a spell and reopened my job availability. So I wound up working most of the day. By the time I looked up to take a breath, it was almost 5 p.m.

Poor Tako was begging to be taken outside, and I realized he hadn’t been out in nearly six hours because I am the worst. As an apology, I shut everything down for the day and walked him to a dog run on the northern side of Park Slope.

Dog parks in NYC are a completely different beast to the dog parks in San Francisco.

In SF, they run the gamut from dog runs… 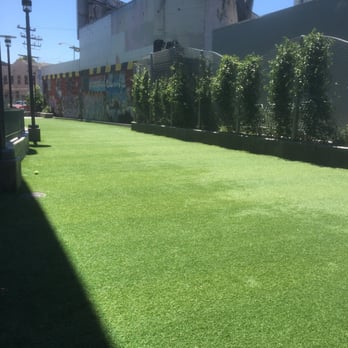 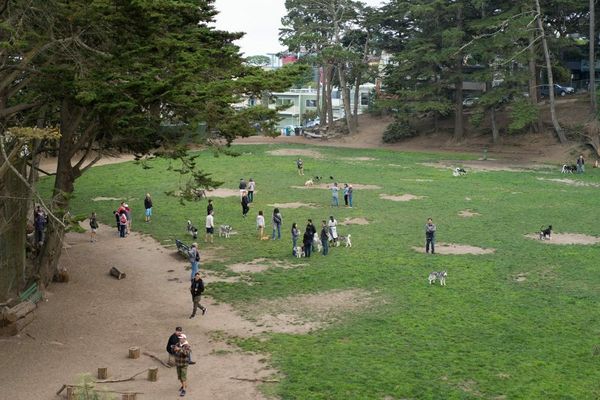 My friend Dyllan commanding our dogs’ attention in Stern Grove.

You can’t see the fencing in the above photo because the entire perimeter is evergreen trees, and the tree line blocks most of the traffic and city noise. There’s actually a path that runs around the park, sandwiched between the tree line and fence, and it has amazing views of downtown, but it’s pretty narrow, and you’ll be battling excited huskies for space on the climb.

Unlike other parks where I’ve run into some issues — either with dogs who should not be trusted off-leash in a group setting, or people who just don’t care very much what their dog does — 100% of the dogs and people I’ve met at Upper Douglass have been awesome.

If Diamond Heights is too far out of your way — and, lets face it, it is for anyone without a car — or you want a little more variety to choose from, 49 Miles has a list of fully-fenced dog parks in SF. I took a glance at it, and it seems pretty comprehensive. There’s even a few I hadn’t heard of before.

In NYC, you basically have dog runs, which are gravel and usually tiny. To be fair, before 9 a.m. & after 9 p.m. most parks in the city allow dogs to run around off-leash, and there are some great meadows in Prospect Park. Those hours just aren’t very convenient times for a normal human who has normal human responsibilities.

I’ve found a couple of supposedly real (or closer to SF style) dog parks in Brooklyn that I do want to check out.** But it’s been so hot that I haven’t been willing to drag Tako that far. It’s on the docket for next week if the cooler weather we’ve been promised comes to pass.

The one in Washington Square Park is the best I’ve come across. It’s bigger than the others I’ve seen, for one thing, and it looks like it was intended to be two runs; one for big dogs, and one for small dogs. But the gate in between is just left open, and the dogs mingle at will.

I wound up staying two hours and messaging my friend Caitlin that I was spending Friday night at a dog park and was legit having a great night. And it was a great night.

So, basically, until Shannon got home from work, the only outdoor activity I participated in was going to the dog park. When I told her as much, she pointed out that I had to get out of the house at some point and interact with other humans, and I was like “But do I?” and convinced her to drink with me at the apartment.

(Not that she needed convincing. The woman is a total provider and showed up with a full box of spiked seltzers.)

Molly & Sean left on vacation, which was sad. But they’ll be back in a week.

*Sadly, this clock is no longer available. But I definitely need some Pacific / Eastern clocks in my life so I stop disturbing people super early.

**NYC Parks Department has a great website. It lets you search to find all sorts of events (outdoor movies) or special needs (dogs-allowed) and generates a list of the park areas that match.