I love it here so much.

We got up early yesterday morning to get out on the trails because I read they could get packed, and I’m so glad we left at 6:45 a.m. to get there. By the time we were leaving the park at 9:30 a.m., there was a line of cars (mostly with boats attached) waiting to be let into the main section of the park.

Also, we got the early morning sunshine, which was spectacular over the river along the Deschutes River Trail.

And, for a third thing, it meant we didn’t run into any trail runners or other dogs until Tako was completely tuckered out from a 2-hour hike already. Because as soon as we saw one — as I was posing him for a picture, naturally, so didn’t have hold of his leash — he bolted right up to them, barking.

This is a somewhat new habit that’s cropped up over the past few months. When he wants to meet a person or dog — Wait, let me back up and explain some things about Tako.

Tako is the friendliest dog in the world. He assumes upon spotting another creature (or sometimes inanimate objects; he only has one good eye) that they are his new best friend, and they simply don’t know it yet.

Unfortunately for Tako, he’s also incredibly awkward. I didn’t have him for the first year of his life, so I’m not entirely sure what happened to him. But I’ve been told that he was basically locked in a room by himself all day every day. He definitely wasn’t socialized until I got him, and he tends to run to a dog’s face, rather than their butt, as is socially acceptable for dogs. (For those not in the know, running at a dog’s face is a sign of aggression to them…so not good when my tiny pug is trying to head-butt a Great Dane.)

He’s such a happy dog by nature that he really embraced it when I started bringing him everywhere I could. I feel very lucky that he’s not terrified of all new places and things and people and creatures.

I’ve tried telling him to play hard-to-get, but he’s not listening. And I’ve taken him to multiple trainers trying to teach him not to bark at people/dogs/things he wants to meet, but positive reinforcement is just not doing the trick, and I don’t want to move on to negative.

So I thought immersion therapy might work. The more stimuli he’s receiving on a daily basis, the less exciting/jarring the experiences will be, right? So far, that is wrong. No matter how many dogs and humans we meet, he’s still just as ecstatic to meet the next one. (Face palm.)

I’ve considered getting a second dog to keep him company since he so clearly longs for a built-in playmate, but I can’t wrap my mind around being out-numbered by my pets. That’s asking too much. So he’s forced to attempt to make friends. Which he is very bad at. Luckily, O.B. (our host’s dog) is the other friendliest dog in the world, and they’ve gotten along great.

This is what happens every time:

Step 1: Tako spots an innocent dog on the horizon.

Step 3: Kaitlin attempts to pull Tako over to the side to allow the innocent dog and human to pass unassaulted. Tako somehow turns 22lbs of soft puggy fat into 100lbs of solid no-way-am-I-moving muscle.

Step 5: Tako lunges or barks repeatedly, pulling to get to the dog, who is of course now completely freaked out by this tiny ball of apparent-fury.

Most dog owners laugh it off because Tako is so obviously not going to cause damage, even if he did attack. Because, of course, Tako likes the big dogs.

Tako did overheat in the afternoon, which was a little scary for me, but we got through it. We went and had a beer at Anthony’s in the Old Mill District, where they set us up with a table that was about 10 feet from the river bank and had a view of all the floaters on the water.

The kolsch was pretty good, too, but it’s hard to beat that view. They even set out a bowl of water for Tako without me having to ask.

By the time we got back to the AirBnB, I knew Tako was done for the day.

We wound up hanging out with Burke, our host, his friend Matt, and their dogs, O.B. and Forest, for the rest of the day. 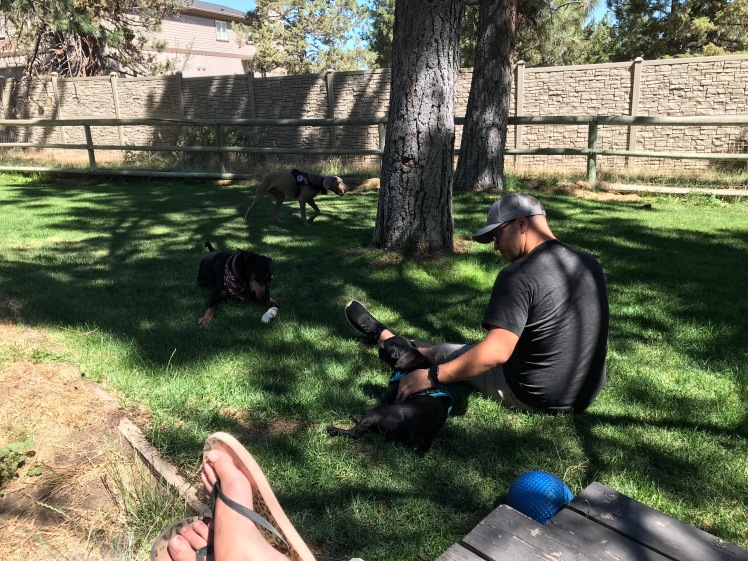 The moment I had to resort to using Tako’s pack. We’ve never had to use it before. I really only have it for emergencies while hiking: rocky terrain or overheating or some sort of injury to a paw. He’s small, but hiking while carrying 22lbs out of pug is a bit beyond my strength for more than a few minutes.

I never thought I would have to use the pack in public.

Bend was so hot yesterday, though, that he couldn’t walk on the asphalt, and the grass didn’t extend all the way through the Old Mill District, so we looked a bit silly walking through the southern part of town. 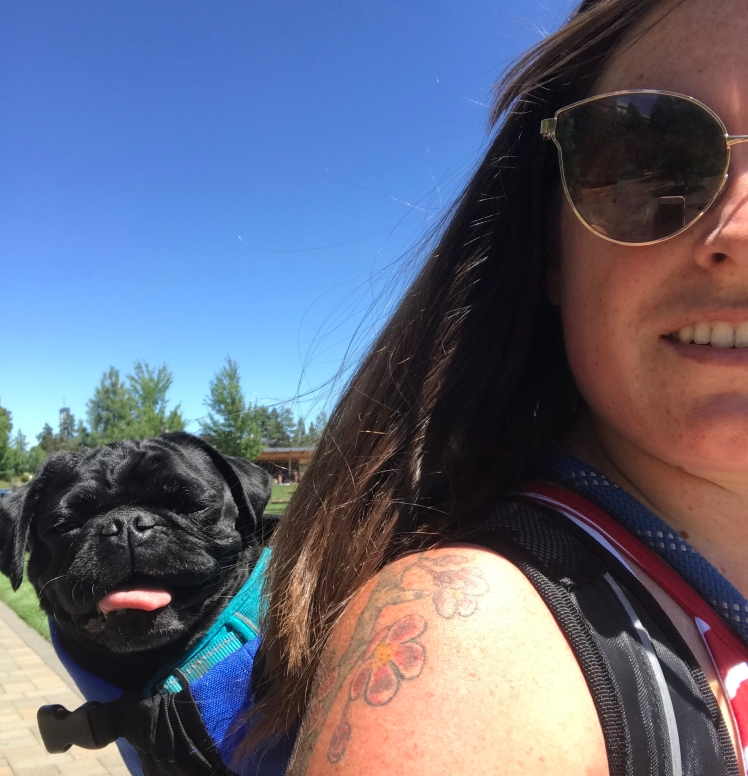 People were really nice about it, though. Not one person we passed — and we were passing one of the main launch points for floating the river — made any comments other than how cute he is.

I was a bit surprised by how nervous I was about other people’s reactions. If the dog is safer this way, what do I care what the guy carrying a paddle-board thinks of me or Tako? But I did. I really did. I’m working on trying to care less about what people think in general…

Listening to: “Avalanche” WALK THE MOON