I’m going to tell you a secret, though: At first, I didn’t love Portland. I’m blaming Friday the 13th for this one, guys.

Before we left Bend, we went on a mini food tour. I started at Sparrow Bakery, but I had such a terrible experience there that I didn’t bother with photos. Otherwise, so much deliciousness.

A nice guy named Gabe introduced himself to me at El Sancho (after our dogs introduced themselves) and told me all about the Oregon Country Fair, which is apparently quite the party after-hours if his stories were to be believed. He offered to get me in if I made it out near Eugene. Not really my thing, but I thought it was very kind of him since it’s some sort of elite wrist-band situation from what he was saying. Very friendly people in Bend.

And okonomiyaki for lunch from a food truck park on Industrial. It’s somehow connected to Spoken Moto, though I’m not sure how. They were even setting up for an outdoor concert, which was really cool.

Check out Instagram story highlights for a full view of the park. And it’s not just food trucks!

We left Bend with heavy hearts that afternoon. Well, I did. Tako passed out in the backseat and didn’t wake up until we got to Portland.

Due (I’m sure) entirely to the fact that it was Friday the 13th, it took us nearly 5 hours to get to Portland. Granted we took the scenic route because I wanted to drive through Willamette National Forest. I meant to stop at either Painted Hills or Smith Rock on the way, but my phone died, and I wanted to meet up with my friend Mark that night if at all possible and, with my phone dead, I had no idea if he was trying to reach me. So I brushed off those plans and just headed straight to Portland on the long route through Deschutes and Willamette.

I’m so glad I did. It was one of the most beautiful drives of my life. Traffic was so terrible that pulling onto the vista points was impossible (every single one was full!!), so I have no photos to share, and I’ve stolen a photo of Mount Washington from Wikipedia. (Sorry, Wiki.)

Why so gorgeous, Oregon?

The last 30 miles to our AirBnB (in North Portland, or NoPo) took us over an hour and a half. But we did get to drive over the NW Bridge / St. Johns Bridge, named for the neighborhood where we’re staying.

We got to the AirBnB to discover there’s no AC, which is pretty bad because it was nearly 100F, and Tako had melted into the floor before I finished unpacking the car.

I tried to take him on a short walk through the little downtown area of St. Johns (which reminded me so much of old-school Brooklyn), but it was so hot he sat down and refused to move. Then three homeless men asked to have his water, and I turned back to the AirBnB, defeated.

It’s probably not fair to blame Portland as a whole for all of that. So I’m blaming Friday the 13th.

But you can imagine I was a bit resentful for a few minutes there. But then Mark showed up to take me and Tako to dinner and a short driving tour of the Pearl District (because I love brick buildings).

I fell in love without even leaving the car. Portland is full of little pocket neighborhoods, and each one has such a distinct personality. It reminds me of San Francisco in that way, except — as Mark pointed out — there are no mountains cutting one neighborhood off from the next, so everything is incredibly walk/bike-able.

We went to dinner on the NW side at a place called Victoria Bar. Thanks to Tako, I couldn’t go inside, but look at this: 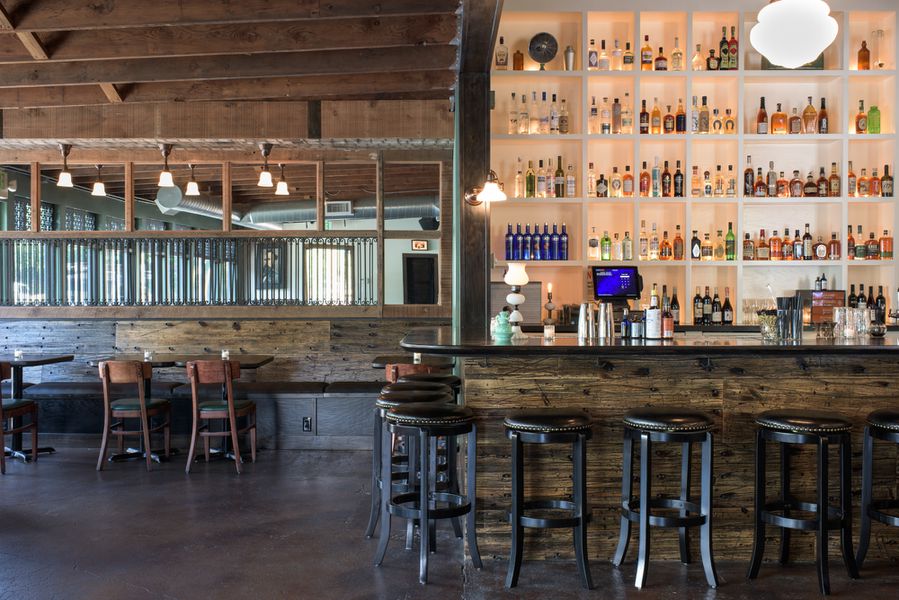 (photo credit: Dina Avila / Eater Portland) How beautiful is that?

The space outside is all communal tables full of incredibly friendly Portland folk, a few of whom had dogs of their own. We wound up seated next to a man and a woman who had a puppy with the fluffiest ears. I took a surreptitious photo…

…not realizing that the people were super friendly, and I could have just asked. Anyway, they inspected what we ordered because Mark and I take no prisoners with menus and wound up ordering the poutine at our recommendation.

I had my first Portland Boozy Slushie at Victoria, and it was glorious. I also ordered the R.O.U.S. based on name alone, and I should have realized it was a joke about the size…

…but we all know I’m a little oblivious to details.

We went for a walk after dinner — because so much food — and ran across this art piece. I saw this SAME wall art in Portland, Maine a few years ago! I went for a retreat with Arwyn Moonrise Yoga a few years ago and had to skip the sea-kayak trek thanks to my broken tailbone, so I went on a solo walking tour of Portland, ME and fell in love with that Portland, too.

I found the “Before I Die” mural on the docks. It was easily twice the size of the one I found here, but it was exactly the same otherwise.

Sorry these photos are so terrible. The lighting was weird, and, also, did you see the size of my second cocktail???

The owners left a jar of chalk out so that passersby could add to the wall. Both Mark and I did. And I feel like our additions were closely related.

Before I die I want to be proud of who I am.

Before I die I want to find peace within me.

Because wouldn’t being proud of who you are bring you peace? Maybe I’m off-base.

Tako and I went to bed with a list of places we want to visit on Day 6. Wish us luck getting through it. It’s about 2 pages hand-written. Oy.

Dinner with Mark! We hadn’t seen each other in years, so catching up took a long time. It’s strange how, with old friends, you can slide right back into someone’s life seamlessly.

Hiked: 14mi (We did not leave the car yesterday, and our after dinner stroll doesn’t really count.)

Written: 3k (I finished the short story I started at Anthony’s!)