I didn’t take many pictures during the day we spent on Sauvie because I was so distracted by anxiety. So this post is pretty text-heavy.

I think I mentioned that I was worried about the heat the day before we even headed to the island. I texted my best friend about it. I called my aunt for her advice. I even checked to see if I could find an AirBnB or hotel room for the night instead, but Portland was fully booked everywhere.

So Option B would have been driving up to Seattle, skipping Forest Park, and descending on my friends Sumit & Ashwini a full day early. I chose Option A. I don’t regret it, exactly, but I learned some harsh lessons for the rest of this trip.

A little info about Tako & his breed: Pugs have an 85F rule. Anything over 85F for prolonged periods of time can result in heatstroke because they have so much trouble cooling off.

It’s partly the squishy face. Dogs cool off by sweating around their paw pads and by panting — blowing out the hot and drawing in the cool air. With the short snout, the air doesn’t really flow well, so cooling off is especially hard for pugs, bulldogs, frenchies, bostons, etc.

They also have a double-coat. but someone recently told me that should help protect them from the heat, so I’m confused on that score.

Tako is all black to boot. So that heat just soaks right into his fur, and he can’t escape it.

Tako sought out all the shade he could, and our tent was fairly well protected by a tiny stand of trees.

But it just wasn’t enough. In the shade, it felt like it was 90-something.

The sand was too hot for him to walk on, so I kept picking him up, carrying him to the river, and dunking him. But it was so hot that he would dry off within minutes. Even in the shade. I couldn’t believe it.

The beach is his favorite place on the planet, and he had absolutely no interest in exploring with me. He was too miserable. It was awful.

Tako might have been the saddest pug on the planet, but I was taking over the slot of World’s Biggest Grumpy Gus. Ali called this heat agitation, and I had never experienced it before, but it is real, man.

It got to the point that absolutely everything irritated me.

It was utterly ridiculous and self-feeding. You name it, and I would have found a way to be irritated.

I wound up with a tension headache by 5 p.m. So of course that was the night a family of thirty decided to invade the beach with screaming children (we’re talking bloody-murder screaming; at first I thought they were being abused), off-leash dogs, and several boomboxes that were competing for dominance.

I was camping on private property, but the beach itself is public. So it’s not like they were trespassing. And I didn’t want to spoil their fun just because I was having a day.

But one dude kept bringing his off-leash dog right up to where Tako and I were camping. He literally got naked to change into his swimsuit three feet from my tent. Tako was leashed because that’s the law on that particular beach, and it was freaking him out while he was on his lead and already not feeling well.

So I politely asked the guy if he could move the dog a ways down the beach. I pointed at Tako, but maybe he didn’t understand why I was asking because he glared at me, said something I didn’t catch, and proceeded to ignore me entirely. Instead, he brought more people over and began using the boundary of my campsite (a driftwood log) as storage for their stuff.

Again, technically the only law/rule they were breaking was that his dog was off-leash. And the dog seemed like a perfectly lovely little creature. He hadn’t even noticed Tako. He was having a blast splashing around in the river, getting chased by the screaming kids. His day was awesome.

Tako’s was not. And the dog’s owner was a jerk.

I tried to let it go. I really did. I moved Tako over to the firepit instead, but that put him in the sun again, and he started panting like he was having a panic attack. (I know he was just hot, but I was beyond reason at this point.) Plus the site was very small. Tako could still hear and see everything that was happening, and he still had to be tied up, so he was getting more and more upset with every minute, and I couldn’t calm him down or distract him because he felt so terrible.

Don’t screw with my dog. I’ll take all manner of inconsideration towards myself that I shouldn’t just to avoid confrontation.

Tako is my trigger. He’s my responsibility to keep safe and happy and healthy. He relies on and trusts me to make everything okay. And, by God, I will do that if it’s with my dying breath.

So down I went onto the beach to give that jerk a piece of my mind. Long story short, the dog was put back on leash, and not even the kids would come near our campsite for the rest of the evening.

It helped that the owner of the property where I was camping came down on his ATV to check on me around the same time. But that just made me feel like the only reason Mr. Jerk listened to me was because a man had my back.

Jay (the owner) was lovely about the situation, though, and even offered to let me stay a second night for free.

Tako finally began to chill out when the sun went down around 9 p.m. He managed to eat and drink some water. The obnoxious people left entirely, which was a blessing, and our fire was so gorgeous set against the pretty sunset sky. Tako put himself to bed in the tent as soon as it was twilight. I made myself some tea and watched the boat turn in circles for about 45 minutes, then did my daily Calm* and put myself to bed.

We even had some company until about 11 p.m. The sound of the boat spinning in the water, sending intense waves at the shore, was one of the best white-noises I’ve ever experienced. 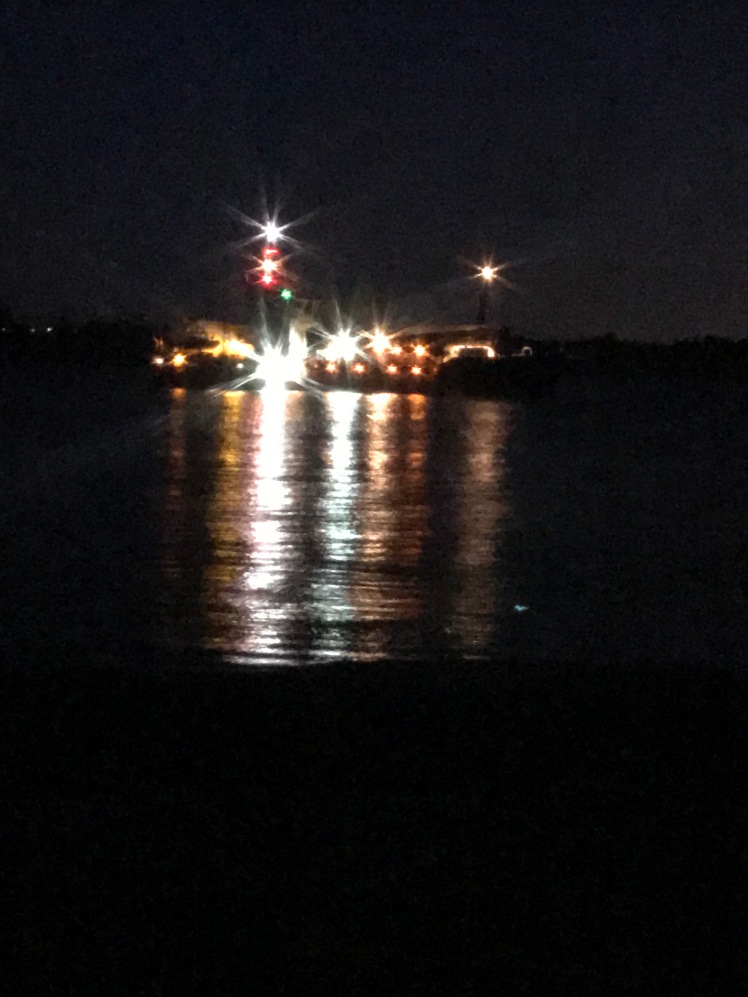 Oh, yeah, and just before bed I realized the cut on my foot was infected. Yay!

*Calm is pretty cool. My besties (Max & Gareth — married and therefore now a set) gave me a year subscription as a birthday gift just before I left.

Watching Tako pant desperately in the shade, so hot that he refused to even drink water I shoved under his nose.

Listening to: “Ace of Spades” Motörhead