We woke up when the sun started to rise around 5 a.m.

Tako still wasn’t feeling well, unfortunately, and refused breakfast. So I tried taking him on a jaunt along the beach since walking in the water seemed to cool him off at least a little.

He livened up a bit, splashed around in the river some, tried to drag me into the water, and picked out a lovely clamshell that he insisted we take back with us. (He was very disappointed with me when I threw it back down to the beach as we left.)

The sun was already starting to beat down at 8 a.m., so I decided to get us the heck off Sauvie Island. Even if you only take a drive around the island, I definitely recommend doing that. It’s beautiful, and in the fall there are corn mazes & pumpkin patches. Or so said the signs posted all over. 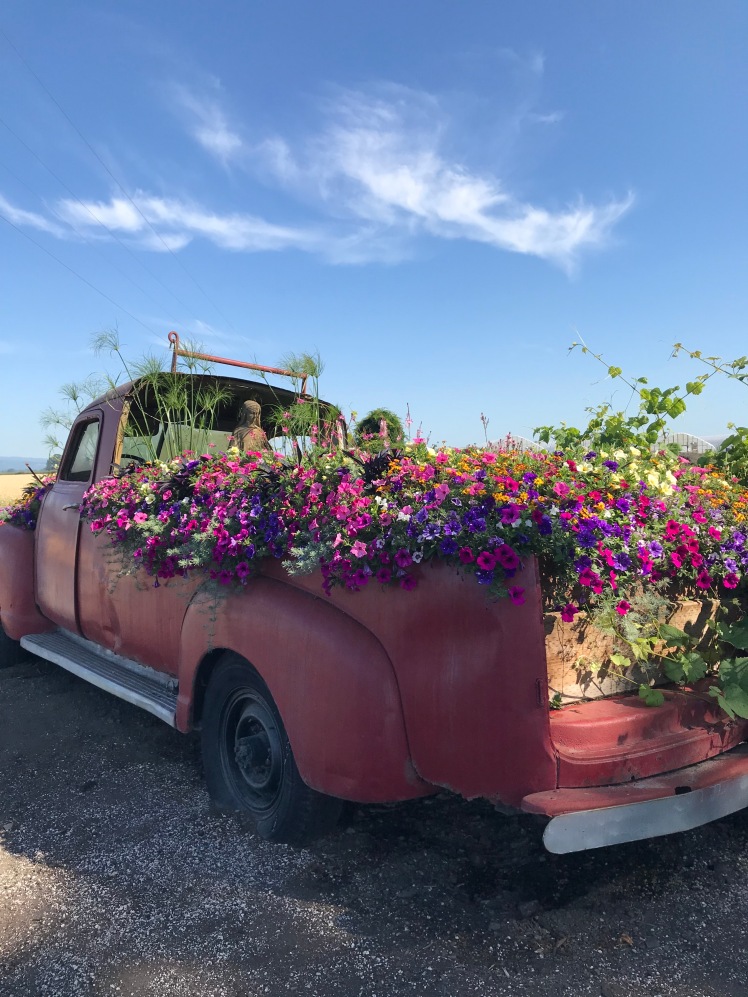 I had been planning to pick some berries in any of the numerous U-Pick farms along the way, but none of them allowed dogs in the fields, and it was way too hot for poor T to be left alone in the car, even with the windows down.

So, instead, we headed back down south to hike. We couldn’t leave the Portland area without checking out Forest Park.

I was worried about Tako and more heat, so I decided to give him a few minutes, see how he managed, and if he didn’t enjoy it, we’d just head back to the car. By some miracle (theory: Portland is actual magic) the air was about ten degrees cooler in the forest!

Every single person we passed on the trails said hello, trail runners always said thank you when I pulled Tako to the side to let them pass unassaulted by pugness, and multiple people stopped to give Tako some love and affection.

My tension headache (still going strong from the day before) disappeared entirely within a few minutes of heading into the woods. Tako was happy again. I repeat, Portland might be actual magic.

We wound up hiking about five miles, happy as could be, but that brought us to 11:30 a.m., and we had to head towards I-5, Seattle, and Sumit & Ashwini.

I got a kick out of my Google Maps piping up to say “Welcome to Washington” as we crossed the Lewis & Clark Bridge just outside of Rainier, OR. It even flagged my navigation screen until we hit the 5.

I-5 in Washington is very different than I-5 in California, which is a rocky brown wasteland across most of the state. The 5 in Washington is chock-full of bridges (I think they’re called truss bridges?) and green as anything.

At Castle Rock, I got off to head to the Mt. St. Helens Visitors Center. I wanted to hike a bit, but we ran into a very strange problem that I didn’t anticipate.

The Visitors Center absolutely does not allow dogs inside, which wasn’t really a surprise to me. But they keep absolutely no maps outside, paper or sign, and the only parking was a bit of a walk from the center in full sunlight with the high-noon sun overhead. Not safe for pooches in cars, even for a few minutes. So going inside wasn’t an option.

My phone had zero service, so I couldn’t use my AllTrails or any of my map apps, either. I was only able to locate one trailhead without the aid of either map or app, and it didn’t specify whether dogs were allowed on it or not. It was a wetland preserve, though, so I decided better safe than sorry, and we scrapped any plans of hiking in the area.

What the heck, Mt. St. Helens? Couldn’t you put at least some of the maps in the vestibule? I could literally see the maps through the two sets of glass doors that separated me and Tako from the center as we stood staring from our spot on the hot, hot rocky patio outside.

Oh well. We took a scenic drive instead. 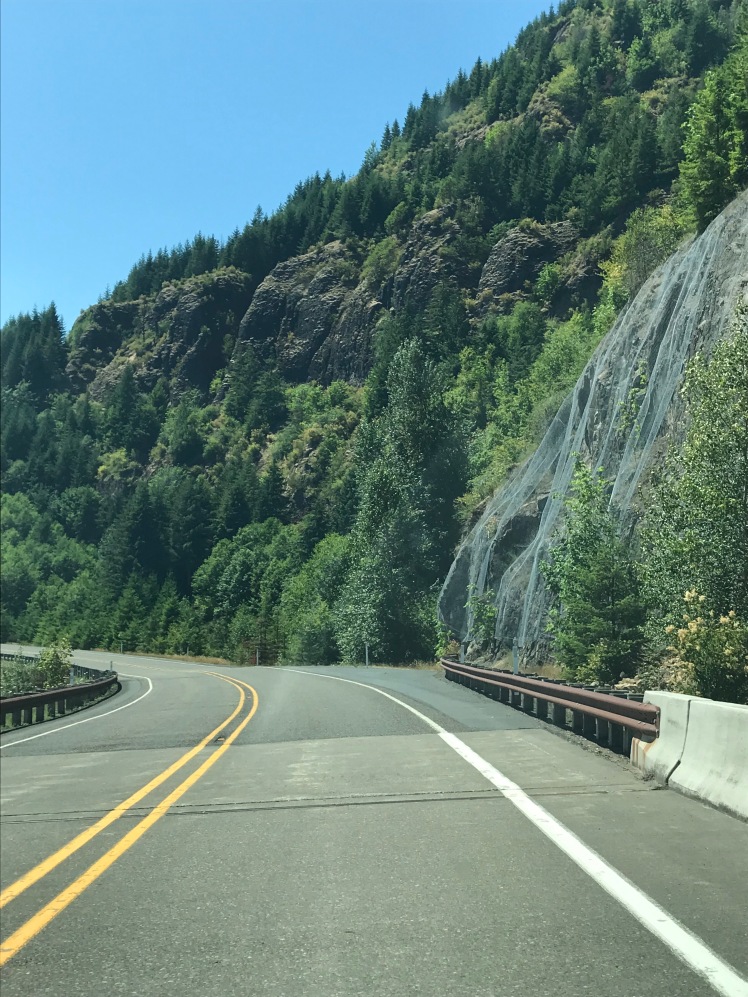 Along the way, we ran into the cutest cottage that had been turned into a restaurant, with views of the river from the wrap-around balcony.

The name was listed as both Fire Mountain Grill & 19 Mile House on the menu, but the greeter said, “Welcome to the House of Pie.” when we walked in, so color me baffled. 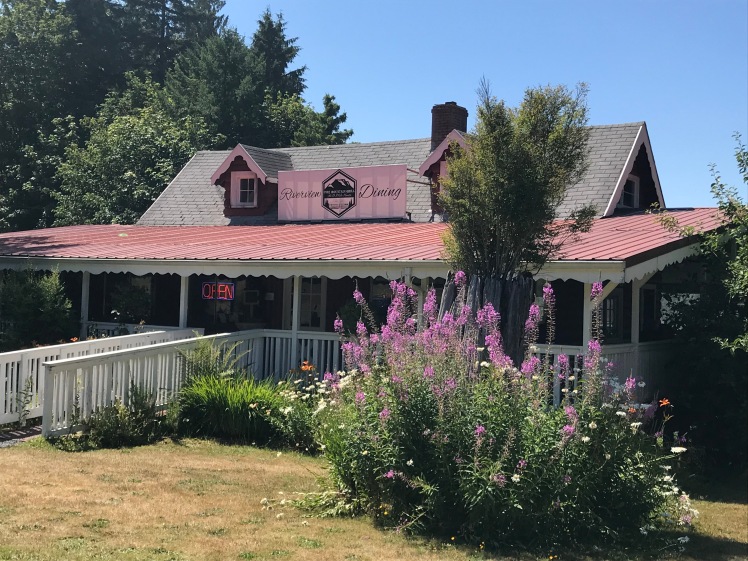 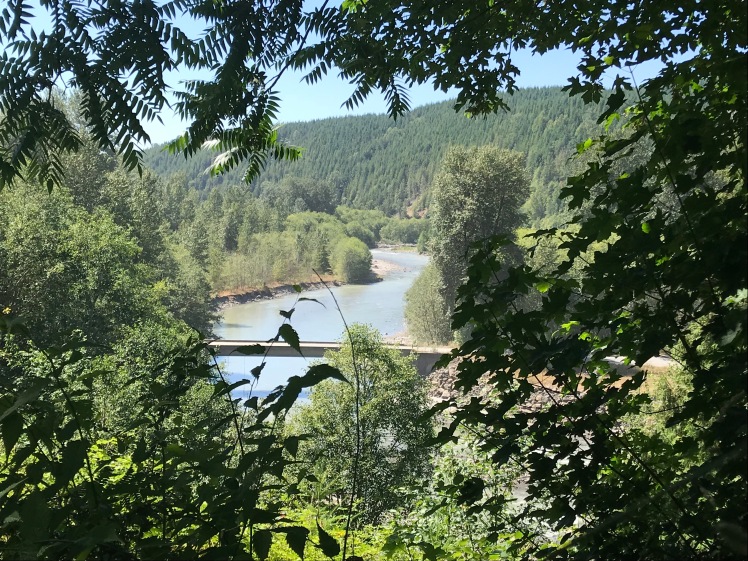 I bought some of their delicious coffee and all three types of cobbler to bring to Sumit & Ashwini: NW Mountain Berry, Caramel Apple, and classic Peach. The chef (I think also the owner?) came out to chat, pet Tako, and give him some water.

After that, we stopped for some postcards (that’s right, I am a dinosaur and still send real mail) east of Toutle and discovered we were in Big Foot Country! 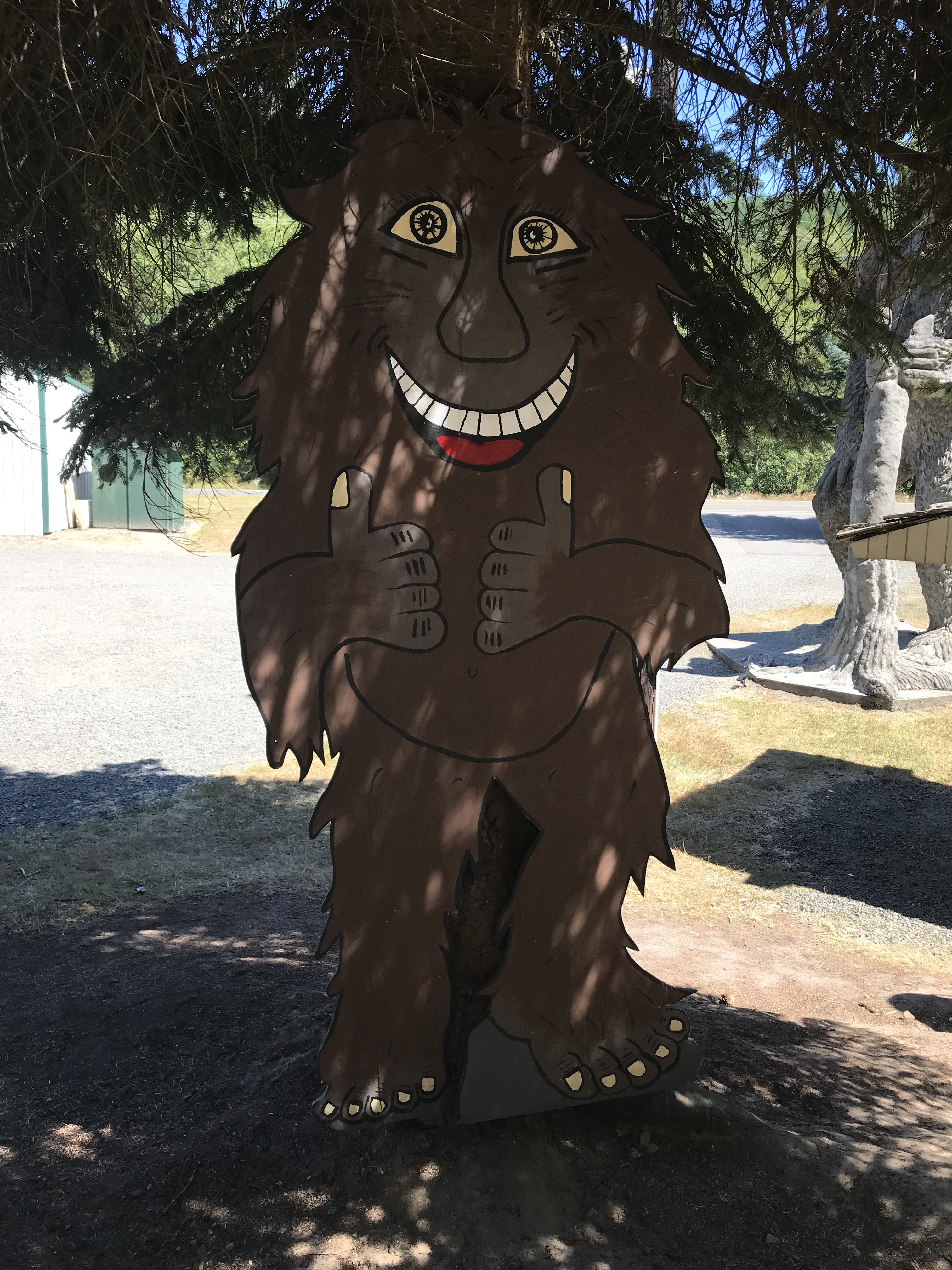 I don’t particularly believe in Big Foot, but I’ve seen some strange stuff in my life. And fact is usually stranger than fiction, so I’m not ruling out the possibility. We should probably all be on alert.

Tako slept most of the way from Portland to Seattle. He got out of the car at the visitor center, but I had to lift him from the backseat to the ground; he refused to jump down on his own steam. So it’s probably a good thing that we didn’t wind up hiking any more yesterday.

As soon as we arrived at Sumit & Ashwini’s, he made Ashwini give him a tour of the whole house and part of the yard. Their house is gorgeous, and I’m not sure Tako has ever been in a house so large before.

After, he curled up on their couch (very generous hosts) and slept until Sumit accidentally brought a husky home with him. And then Tako was very pissed off that I went outside to play with the husky, while Tako (who definitely looked like a toy to this dog) stood on the other side of the screen door, sulking.

I took not a single photo of our reunion, which is just so me. But I did snap this evidence that my friends are way cooler than I will ever be. 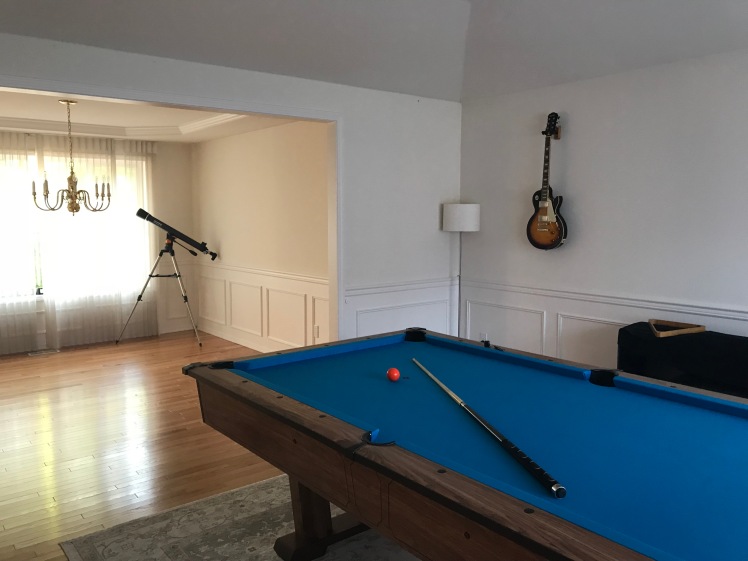 Seeing Sumit & Ashwini! It’s been almost exactly one year since I’ve seen them live and in person.

Creepy gas station guy on the outskirts of Portland. I went in to use the bathroom and buy three giant bottles of water (which Tako and I drank within an hour). He called me “sweetie” in a very suggestive way — I didn’t even realize that “sweetie” could sound dirty — and winked at me when he handed over my receipt. Then he asked me if he could help me with anything else at all, and I nearly threw up on his counter. UGH.